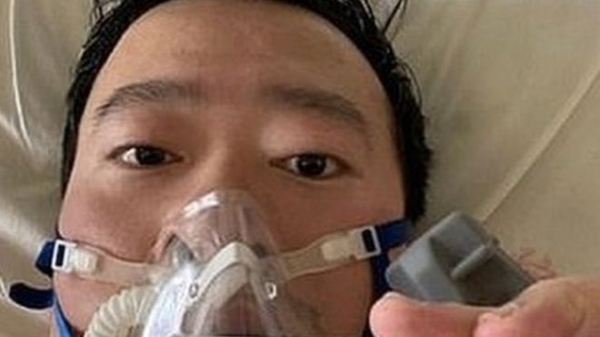 The death of a Chinese doctor who tried to warn about the coronavirus outbreak has sparked widespread public anger and grief in China.

Li Wenliang died after contracting the virus while treating patients in Wuhan.

Last December he sent a message to fellow medics warning of a virus he thought looked like Sars - another deadly coronavirus.

But he was told by police to "stop making false comments" and was investigated for "spreading rumours".

"I don't think he was rumour-mongering. Hasn't this turned into reality now?" his father, Li Shuying, told the BBC. "My son was wonderful."

According to Chinese site Pear Video, Dr Li's wife is due to give birth in June.

News of the doctor's death was met with an outpouring of grief on Chinese social media site Weibo - but this quickly turned into anger.

There had already been accusations against the government of downplaying the severity of the virus - and initially trying to keep it secret.

Dr Li's death fuelled this further and triggered comments about the lack of freedom of speech in China.

The Chinese government has previously admitted "shortcomings and deficiencies" in its response to the virus, which has now killed 636 people and infected 31,198 in mainland China.

What has the public reaction been?
Analysts say it is hard to recall an event in recent years that has triggered as much online grief, rage and mistrust against the Chinese government.

The top two trending hashtags on Weibo were "Wuhan government owes Dr Li Wenliang an apology" and "We want freedom of speech".

The Chinese doctor who tried to warn about coronavirus
Diary of a life in locked-down Wuhan
Both hashtags were quickly censored. When the BBC searched Weibo on Friday, hundreds of thousands of comments had been wiped. Only a handful remain.

A photo circulating on Twitter reportedly sourced from messaging platform WeChat also shows a message in Chinese saying "Farewell Li Wenliang" written in the snow on a riverbank.

Many have taken to posting under the hashtag "Can you manage, do you understand?" - a reference to the letter Dr Li was told to sign when he was accused of disturbing "social order".

The Chinese people will take some convincing that the government knows how to manage such an emergency, he adds.

The beginning of the end?

The number of new cases of the coronavirus has fallen for the past two days.

But it is dangerous to read too much into two days' worth of data.

It is impossible to say if cases are really levelling off, or if this is a sign of health authorities being unable to keep up with testing - or if cases will shoot up again in the next few days.

Realistically, it is going to take another week or so before we have a clear picture of whether the outbreak is peaking.

And there is still a massive mismatch between the figures released by China and what outbreak analysts think is really going on.

It is widely accepted that the laboratory-confirmed cases are just the tip of the iceberg.

Some mathematic models of the outbreak suggest the true size of the epidemic could be 10 times higher than the official figures.

What did Li Wenliang do?
Dr Li, an ophthalmologist, posted his story on Weibo from a hospital bed a month after sending out his initial warning.

He had noticed seven cases of a virus that he thought looked like Sars - the virus that led to a global epidemic in 2003.

On 30 December he sent a message to fellow doctors in a chat group warning them to wear protective clothing to avoid infection.

In the letter he was accused of "making false comments" that had "severely disturbed the social order". Local authorities later apologised to Dr Li.

In his Weibo post he describes how on 10 January he started coughing, the next day he had a fever and two days later he was in hospital. He was diagnosed with the coronavirus on 30 January.

More in this category: « Germany AfD: Thuringia PM to quit amid fury over far right Coronavirus claims 97 lives in one day - but number of infections stabilises »
Login to post comments
back to top