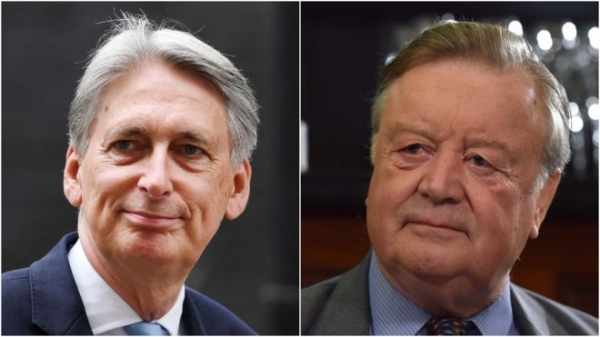 Boris Johnson has nominated two men he kicked out of the Tories in the Commons for opposing him on Brexit for seats in the Lords, the BBC has learned.

attempting to block a no-deal Brexit.

They have now stood down as MPs but have continued to be critical of the prime minister's policies.

The nomination and vetting process for new peers is not yet complete.

Former Conservative leader Iain Duncan Smith, one of Parliament's best-known Brexiteers, said nobody would object to Mr Clarke's peerage, but added that Mr Hammond's would "raise an eyebrow" among Eurosceptics.

Downing Street is also expected to nominate former Scottish Conservative leader Ruth Davidson, who has also clashed with the prime minister over Brexit in the past, for a seat in the Lords.

The pair spoke out repeatedly against Jeremy Corbyn during his leadership and eventually quit the Labour party, campaigning in the general election to keep him out of Number 10.

Neither Number 10 nor the House of Lords Appointments Commission, which vets nominations, would comment on the contents of the Dissolution Honours List.

Convention suggests that former Chancellors often end up in ermine. But convention has hardly been in fashion when it comes to Boris Johnson's government.

Philip Hammond and Ken Clarke were among those expelled from the Tory benches in the autumn, two of 21 MPs removed at a stroke, branded as part of the resistance to Brexit.

But while these nominations are likely to raise Brexiteer eyebrows, they perhaps signal an interest in making peace after years of internal Tory warfare.

Don't be surprised, too, if there are lots of Eurosceptic and Tory donors' names on the list when it is finally approved and emerges.

The inclusion of Hammond and Clarke is notable, but we don't know the shape of the full picture yet.

Mr Hammond, who was chancellor between 2016 and 2019, was blamed by Tory Brexiteers for trying to block the UK's departure from the European Union, despite voting for Theresa May's withdrawal agreement three times.

He resigned as chancellor when Mr Johnson won the race to succeed Mrs May as Tory leader, after repeatedly warning the UK would be worse off after a hard Brexit.

He was then prevented from standing as a Conservative Party candidate at the general election after having the whip withdrawn.

Veteran Europhile Mr Clarke, who stood down as an MP in December after 49 years as an MP, was chancellor between 1993 and 1997.

He was the only Conservative MP to oppose triggering the Article 50 process for leaving the EU after the 2016 Leave vote.

He has continued to be highly critical of Mr Johnson's Brexit policies since the election, telling the Guardian in December: "I could never get out of Boris - and nobody so far could get out of Boris - what he has in mind for the eventual deal. To say they're generalities is an understatement."

Mr Clarke, who unsuccessfully ran to be Tory leader in 1997, 2001 and 2005, has previously said he would accept a peerage if it was offered.

Mr Duncan Smith said: "No one will object to the award of a peerage to Ken Clarke, a great British politician whose record of service is unparalleled.

"However, Brexiteers will raise an eyebrow at the award of a peerage for Mr Hammond, who is seen to have played such a prominent role in government of frustrating Boris in his drive to deliver Brexit, but recognise this is rightly part of a drive to bring the country back together.

"However, I hope Philip reciprocates this characteristically generous gesture from Boris by now supporting him in the House of Lords."

More in this category: « 'Scandal' if Bercow got peerage - ex-Parliament official Work 'under way' into Scotland-Northern Ireland bridge feasibility »
Login to post comments
back to top