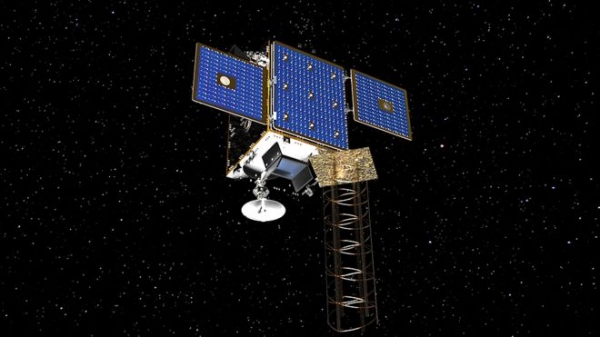 UK satellite company SSTL has got the go-ahead to produce a telecommunications spacecraft for the Moon.

The platform, which should be ready for launch in late 2022, will be used by other lunar missions to relay

their data and telemetry to Earth.

Satellites already do this at Mars, linking surface rovers with engineers and scientists back home.

The Lunar Pathfinder venture will do the same at the Moon.

SSTL is financing the build of the satellite itself but will sell its telecoms services under a commercial contract with the European Space Agency (Esa).

It's hoped other governmental organisations and private actors will purchase capacity as well.

The Moon is set to become the go-to destination this decade with the Americans intent on putting humans on the surface again, 50 years after Apollo.

Nasa's Project Artemis has identified 2024 as the date when the "first woman and the next man" will touchdown, close to the lunar south pole.

The plan is to put the UK satellite into a highly elliptical orbit so that it can have long periods of visibility over this location.

Pathfinder is expected to be particularly useful for any sorties - human or robotic - to the Moon's far side, which is beyond the reach of direct radio transmission with Earth.

The UK satellite's presence would make connections possible and this could be the enabler for some smaller, low-cost lunar projects that would otherwise have to procure their own separate relay system.

But anywhere at the Moon, above it or on the surface - all missions should benefit from the boost in data rates that comes from a local, dedicated telecoms platform.

SSTL says Lunar Pathfinder should be just under 300kg at launch. Its radio payloads will work in S-band and UHF frequencies to talk to nearby spacecraft, and in the X-band to make the back-and-forth connection with Earth.

Goonhilly teleport in Cornwall, with its big radio dishes, is anticipated to act as the uplink/downlink station.

The Guildford firm is getting this opportunity thanks to the money invested by the UK government in Esa at its recent Ministerial Council in Seville, Spain.

The UK Space Agency (UKSA) delegation committed €14m (£12m) to Europe's lunar exploration budget. British representatives also put down €18m (£15m) to be part of efforts to develop an international space station at the Moon called Gateway. Again, the UK is hopeful it can play a role in this station's communications.

"This would be to talk from Gateway to surface missions," said Sue Horne, the head of space exploration at UKSA.

"This should be compatible with Lunar Pathfinder. So, you can see our strategy: We'd like to take a lead in deep space communications with Goonhilly, Lunar Pathfinder and Gateway. We're carving out an area for the UK," she told BBC News.

Separately, SSTL is working on a feasibility study for Esa looking at how a constellation of spacecraft could be flown around the Moon to provide not just telecoms but also satellite-navigation services for the lunar market (SSTL has been part of thee consortium that's built all the spacecraft for Europe's Galileo sat-nav system). Good positioning on the Moon will be relevant as more and more missions visit the surface.

"Lunar Pathfinder is a 'pathfinder' - it will prove the technology but also test the viability of a commercial market for telecoms services at the Moon. When the future constellation is launched, Pathfinder will become a node within that network," explained Nelly Offord Harlé, the business manager for exploration at SSTL.

More in this category: « Petrol and diesel car sales ban brought forward to 2035 Solar Orbiter: Sun mission blasts off »
Login to post comments
back to top