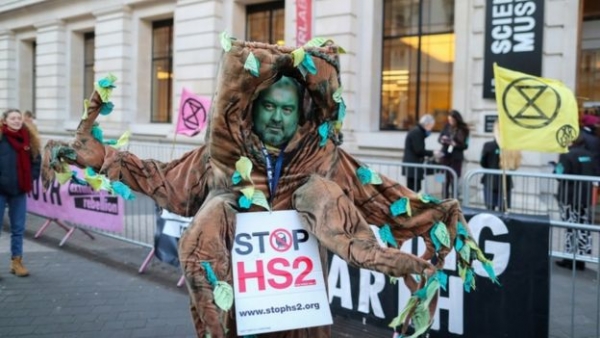 A ban on selling new petrol, diesel or hybrid cars in the UK will be brought forward from 2040 to 2035 at the latest, under government plans.

Boris Johnson unveiled the policy as part of a launch event for a United Nations climate summit in November.

He said 2020 would be a "defining year of climate action" for the planet.

The summit, known as COP26, is being hosted in Glasgow. It is an annual UN-led gathering set up to assess progress on tackling climate change.

Sir David Attenborough said at the launch event at London's Science Museum that he was looking forward to COP26 and found it "encouraging" that the UK government was launching a "year of climate action".

"So now is the moment. It is up to us to organise the nations of the world to do something about it."

Mr Johnson said the ban on selling new petrol and diesel cars would come even earlier than 2035, if possible.

Hybrid vehicles are also now being included in the proposals, which were originally announced in July 2017.

People will only be able to buy electric or hydrogen cars and vans, once the ban comes into effect.

The change in plans, which will be subject to a consultation, comes after experts warned the previous target date of 2040 would still leave old conventional cars on the roads following the clean-up date of 2050.

The Scottish government does not have the power to ban new petrol and diesel cars but has already pledged to "phase out the need" for them by 2032 with measures such as an expansion of the charging network for electric cars.

Mr Johnson said the 2050 pledge was necessary because the UK's "historic emissions" meant "we have a responsibility to our planet to lead in this way".

The announcement comes as COP26's former president Claire O’Neill, who was sacked on Friday, wrote a bitter letter accusing Mr Johnson of failing to support her work.

The prime minister's official spokesperson said Downing Street had "no comment" to make on the letter, but thanked Mrs O'Neill for her work towards the conference.

He said her replacement would be a "ministerial post" with details set out "in due course."

Mr Johnson did not answer the BBC's David Shukman's questions about the row.

Mr Johnson said: “Hosting COP26 is an important opportunity for the UK and nations across the globe to step up in the fight against climate change.

“As we set out our plans to hit our ambitious 2050 net zero target across this year, so we shall urge others to join us in pledging net zero emissions.

“There can be no greater responsibility than protecting our planet, and no mission that a global Britain is prouder to serve."

The prime minister added that a "catastrophic period of global addiction" to hydrocarbons had led to the planet being "swaddled in a tea cosy" of carbon dioxide.

Rise of SUVs 'makes mockery' of electric car push
Sacked climate chief 'may sue government'
Clean car target 'needs to be sooner'
Friends of the Earth's Mike Childs said the government was "right" to bring forward the ban, but that 2030 would be better than 2035.

“A new 2035 target will still leave the UK in the slow-lane of the electric car revolution and meantime allow more greenhouse gases to spew into the atmosphere," he said.

He said the government could show “real leadership" ahead of COP26 by reversing plans to develop "climate-wrecking roads and runways".

The chief executive of the society of motor manufacturers and traders (SMMT) accused the government of "moving the goalposts".

"With current demand for this still expensive technology still just a fraction of sales, it's clear that accelerating an already very challenging ambition will take more than industry investment," Mike Hawes said.

He said the government's plans must safeguard industry and jobs, as well as ensuring current sales of low emission vehicles were not undermined.

Meanwhile Mrs O’Neill accused Mr Johnson of promising money and people to support her work, but failing to deliver either.

She also said he admitted to her that he "doesn't really get" climate change and claimed he had refused to give Scottish First Minister Nicola Sturgeon an official role at COP26.