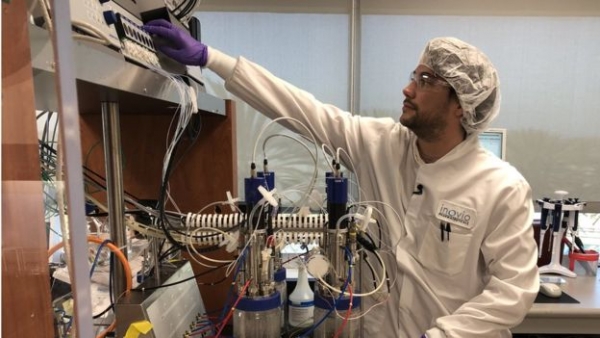 A deadly new virus. Thousands of people infected. No cure. No vaccine.

We've been here many times before.

In the past five years alone, the world has faced outbreaks of Ebola, Zika, another coronavirus called Mers (Middle East Respiratory Syndrome), and now the virus simply known as "2019-nCoV".

It's already infected thousands of people and killed more than 100.

But unlike in many previous outbreaks, where vaccines to protect people have taken years to develop, research for a vaccine to help stem this outbreak got under way within hours of the virus being identified.

Chinese officials released its genetic code very quickly. That information helps scientists determine where the virus probably came from, how it might mutate as the outbreak develops, and how to protect people against it.

With technological advances and greater commitment from governments around the world to fund research on emerging diseases, research facilities were able to spring into action fast.

Unprecedented speed
At Inovio's lab in San Diego, scientists are using a relatively new type of DNA technology to develop a potential vaccine. "INO-4800 " - as it's currently called - with plans for it to enter human trials by the early summer.

Kate Broderick, senior vice-president of research and development at Inovio, said: "Once China had provided the DNA sequence of this virus, we were able to put it through our lab's computer technology and design a vaccine within three hours.

"Our DNA medicine vaccines are novel in that they use DNA sequences from the virus to target specific parts of the pathogen which we believe the body will mount the strongest response to.

"We then use the patient's own cells to become a factory for the vaccine, strengthening the body's own natural response mechanisms."

Inovio says if the initial human trials are a success, larger trials would follow, ideally in an outbreak setting in China "by the end of the year".

It is impossible to predict whether this outbreak is likely to have ended by then. But if Inovio's timeline goes to plan, the company says it will be the quickest a new vaccine has ever been developed and tested in an outbreak situation.

The last time a similar virus - Sars - emerged in 2002 - China was slow to let the world know what was happening. So by the time work on a vaccine started in earnest, the outbreak was almost over.

31 December 2019 - China alerts the World Health Organization (WHO) about a spate of pneumonia-like cases in Wuhan
1 January 2020 - The seafood/animal market believed to be at the centre of the outbreak is closed
9 January - The WHO says the infection is caused by a new type of coronavirus
10 January - China shares the genetic code of the new virus
11 January - Scientists start working on a vaccine - and the first death confirmed
13 January - Virus spreads abroad for the first time, with a case in Thailand
The work in these labs is being funded by the Coalition for Epidemic Preparedness Innovations (Cepi), which is made up of and funded by governments and philanthropic organisations from around the world.

It was created in the aftermath of the Ebola outbreak in West Africa to provide funding to accelerate the development of vaccines for new diseases.

Dr Melanie Saville, director of vaccine research and development at Cepi, said: "The mission is to make sure that outbreaks are no longer a threat to humanity and to develop vaccines for emerging infectious diseases."

'Molecular clamp'
Cepi is also funding two other programmes that are developing a vaccine for this new coronavirus.

The University of Queensland is working on a "molecular clamp" vaccine, which it says "enables targeted and rapid vaccine production against multiple viral pathogens."

Moderna Inc in Massachusetts has also joined forces with the US National Institute of Allergy and Infectious Diseases to accelerate its research.

The WHO is co-ordinating this global quest for a new vaccine. It says it is following the progress of a number of research facilities, including the three supported by Cepi.

Although efforts to come up with a vaccine for this new coronavirus have been accelerated, research is still at an early stage at all the facilities in the race to find a new vaccine. Clinical trials take time and are best carried out within an outbreak setting.

There are no guarantees any of the designs so far will be safe and effective enough to be used in the outbreak in China.

Ana Maria Henao-Restrepo from the WHO's Health Emergencies programme said: "We have developed a framework to inform decisions on which candidate vaccine(s) should be tested first.

"The experts will consider a number of criteria, including acceptable safety profile, induction of appropriate immune responses, and the timely availability of sufficient supplies of vaccine doses.

"Understanding the disease, its reservoirs, its transmission, its clinical severity and developing effective counter measures is critical for the control of the outbreak."

The WHO is due to decide which vaccine will be tested on humans first in the coming days.

More in this category: « Immune discovery 'may treat all cancer' Coronavirus: Two cases confirmed in UK »
Login to post comments
back to top