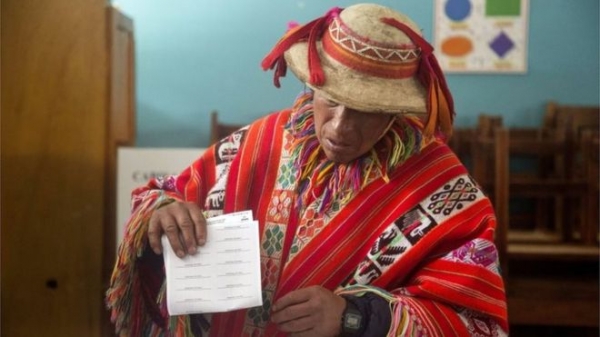 Peru's once influential conservative Popular Force party has suffered a crushing defeat in congressional elections. The party dominated Congress before the body was dissolved by President Martín Vizcarra in September.

No party won an overall majority but centrist parties have made gains, which could ease the passage of reforms.

The new Congress will be short-lived - it will be replaced in next year's general elections.

What are the results?
A quick count carried out by Ipsos research firm suggests Popular Force has dropped from the 36.3% it won in the 2016 election to 7%, putting it into sixth place.

If confirmed, the figures mean that the party will lose many of the 73 out of 130 seats in Congress it held until September.

According to the quick count, the centrist Popular Action party will emerge as the strongest party with 10.1% of the vote.

An evangelical party, the Agricultural People's Front of Peru, known by its initials in Spanish as FREPAP, came second in the quick count with 8.9%. The party has not had any representatives elected to Congress since 2000 and its last-minute surge has surprised political analysts.

It is followed by the right-wing Podemos Peru (We can, Peru) party with 8.2%, and the centre-right Progress Alliance with 8%.

In another unexpected result, the nationalist Union for Peru (UPP) also passed the 5% threshold necessary to enter Congress.

What does it mean?
The new Congress will be fragmented but analysts think the gains made by centrist parties could work in President Vizcarra's favour.

They argue that if he manages to get enough small parties on his side he will be able to push through the anti-corruption reforms Popular Force blocked.

The losses suffered by Popular Force are a big blow to its leader, Keiko Fujimori.

The daughter of former president Alberto Fujimori has been a divisive figure in Peruvian politics. She is accused of accepting $1.2m in illegal campaign financing from Brazilian construction giant Odebrecht and a judge is due to decide on Tuesday whether she should be sent to jail to await trial.

Her father is serving a sentence for corruption and human rights abuses.

Despite their legal woes, the Fujimori family has retained the backing of hardcore supporters. But political commentators say the election result suggests that Fujimorismo, the political movement named after them, may have finally collapsed.

What's the back story?
Normally, congressional elections are held at the same time as presidential polls but Sunday's elections were brought forward after President Vizcarra took the drastic step of dissolving Congress in September.

President Vizcarra made the fight against corruption his main priority when he took power in March 2018 after then-President Pedro Pablo Kuczynski resigned over a vote-buying scandal. When parties, led by Keiko Fujimori's Popular Force, blocked his efforts, he simply dissolved the legislative body.

Peru in turmoil after President Vizcarra dissolves Congress
Peru's top court says dissolution of parliament was legal
Opposition lawmakers denounced the move as a coup but the heads of the armed forces and the police backed the president. Supporters of Mr Vizcarra turned out to show their approval of the move and Peru's top court later ruled that it had been constitutional.