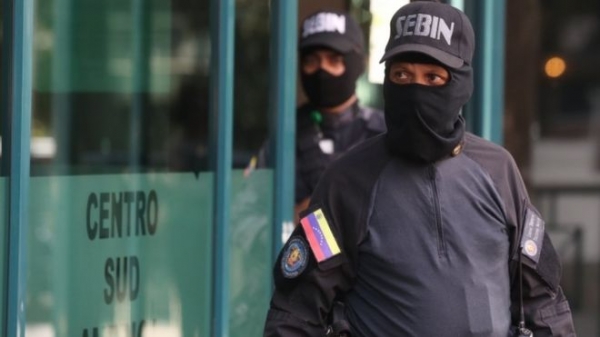 Venezuelan secret service agents have raided the offices of opposition leader Juan Guaidó while he is on a visit to the UK. Footage showed hooded and armed officers from the Sebin service outside the building in Caracas.

Mr Guaidó is recognised by more than 50 countries, including the UK and the US, as the legitimate leader of Venezuela.

However, President Nicolás Maduro, who enjoys the support of the Venezuelan military, has managed to remain in power.

Opposition MPs said they had been prevented from entering the offices by Sebin agents.

Lawmaker Angel Torres said the black-clad officers "abruptly entered" the building. He said there were fears that they would plant false evidence against Mr Guaidó.

The opposition Popular Will party also accused police of detaining MP Ismael Leon on a main road in Caracas.

"As we are travelling... they kidnap @leon_ismael and raid our office," Mr Guaidó tweeted. "The world receives and supports us! We stand firm, we will achieve freedom," he added.

Venezuela's government has not commented on the reports.

It is no coincidence that this raid happened while Mr Guaidó was abroad looking for a much needed new push to his year-long effort to oust President Maduro. While agents searched his offices in Caracas, he was telling cheering supporters in London that he would "win very soon".

Not everybody shares the optimism. Backed by Russia, Turkey and the powerful Venezuelan army, Mr Maduro has managed to resist growing international pressure and sweeping US sanctions, including on the crucial oil sector. Mr Guaidó acknowledged to me that he and his supporters, in Venezuela and outside, had underestimated the president's ability to stay in power.

Next, his team will try to convince the EU to impose new restrictions, targeting, for example, the country's gold trade. But many criticise these measures, saying they exacerbate the suffering of people who are already in desperate need. Mr Guaidó, however, dismissed this, saying Mr Maduro was the only one to blame.

By leaving the country, Mr Guaidó defied, for a second time, a court-imposed travel ban. He declined to say if he feared being arrested upon his return, saying he knew the "risks of challenging the dictatorship", as he refers to the government. His team, though, said they had plans "A, B, C, D and E" ready.

During his trip to Europe Mr Guaidó is expected to visit the World Economic Forum in Davos, Switzerland.

On Monday, he travelled to Colombia to meet US Secretary of State Mike Pompeo on the sidelines of a regional conference.

He was received by Colombian President Iván Duque with full presidential honours.

Mr Pompeo called on other countries to co-operate in efforts to remove President Maduro from office.

Mr Maduro accuses the US of orchestrating a coup to oust him.

The rivalry between Mr Guaidó and Mr Maduro flared recently when Mr Guaidó stood for re-election as National Assembly Speaker, the position on which his claim to the post of acting president rests.

He was prevented by the National Guard from entering the National Assembly building, forcing him to move the session to another location where about 100 lawmakers re-elected him.

Years of turmoil have left Venezuela in the grip of a crippling economic and political crisis.

According to the UN, 4.8 million Venezuelans have left their country since 2016, with 1.6 million arriving in neighbouring Colombia.

Almost a quarter of Venezuela's 30 million people are in need of aid, the UN says.