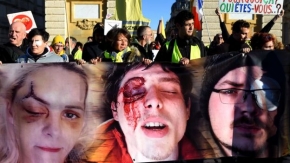 An investigation has been launched after a video showing a French police officer repeatedly punching a protester in the face was shared online. In the footage, the officer is seen striking a man who is pinned to the ground during an anti-

The incident was captured by other protesters at Saturday's demonstration.

Warning: An image below is of a graphic nature

Recent protests have been boosted by people demonstrating against a plan to overhaul France's pension system, which they say will force people to work longer or face reduced payouts when they retire.

Who are the 'gilets jaunes' (yellow vests)?
What is behind France's biggest strike in decades?
Demonstrations have often turned violent. About 60 people were arrested during the latest protest on Saturday following clashes with riot police.

The footage of the officer punching a man who is on the floor and appears to have a bloodied face was widely shared on social media.

The Paris prosecutors' office said on Sunday that an investigation was under way to determine whether "intentional violence by a person in a position of public authority" was committed.

It added that the inquiry was being carried out by the police oversight body.

The Paris police department said it had asked those leading the anti-riot operations to "give a full account of this incident".

Previous rallies across France have also led to scuffles, with a number of injuries reported and allegations of police brutality.

Mr Macron has warned that "unacceptable behaviour" by some officers could undermine the credibility of police departments.

He has also condemned the use of violence by protesters.

In November, police used tear gas and water cannon in an attempt to control crowds when thousands of demonstrators thronged the streets of Paris.

With many clad in black and wearing masks to hide their faces, rioters in parts of the city burned barricades, vandalised banks, set rubbish bins on fire and hurled cobblestones at police.

More than 100 people were arrested in some of the worst violence the city had seen since the protests began.

More in this category: « Brexit relationship: EU reveals clues ahead of talks with UK Seven Kings stabbing: Three killed after disturbance »
Login to post comments
back to top