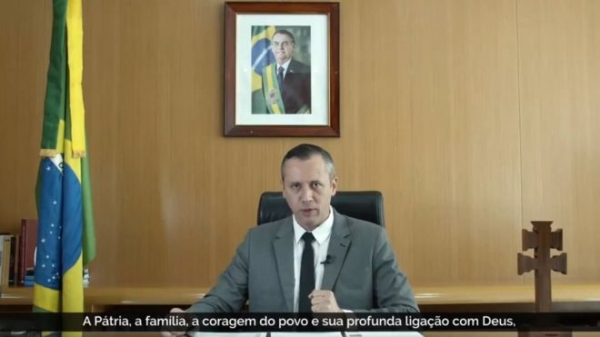 A video in which Brazil's culture minister uses parts of a speech by Joseph Goebbels, Nazi Germany's propaganda boss, has sparked outrage.

In the clip posted on the ministry's Twitter page, Roberto Alvim details an award for "heroic" and "national" art.

Lohengrin by Wagner, Hitler's favourite composer, plays in the background.

Reacting to the controversy, Mr Alvim said the speech was a "rhetorical coincidence". Far-right President Jair Bolsonaro has been urged to fire him.

Mr Bolsonaro, a former army captain with a conservative social agenda, has frequently accused Brazil's artists and cultural productions including schoolbooks and movies of "left-wing bias". He has not commented.

In the six-minute video detailing the National Arts Awards, Mr Alvim says: "The Brazilian art of the next decade will be heroic and will be national, will be endowed with great capacity for emotional involvement... deeply linked to the urgent aspirations of our people, or else it will be nothing."

Parts of it are identical to a speech quoted in the book Joseph Goebbels: A Biography, by German historian Peter Longerich, who has written several works on the Holocaust.

There was widespread condemnation on social media. But there were others who praised the video.

In a post on his Facebook page, Mr Alvim said "the left was doing a fallacious remote association" between the two speeches, and that "there was nothing wrong with his sentence".

"The whole speech was based on a nationalistic ideal for the Brazilian art and there was a coincidence with ONE sentence of a speech by Goebbels. I didn't quote him and I'd NEVER do it... But the sentence itself is perfect."

He did not comment on the music that plays in the video.

On Twitter, the speaker of the lower house of Brazil's Congress, Rodrigo Maia, said Mr Alvim had "gone beyond all limits" saying the video was "inacceptable". He urged Mr Bolsonaro to remove him from the post.

The Brazilian Israelite Confederation said: "To emulate [Goebbels'] view... is a frightening sign of his vision of culture, which must be combated and contained."

It called for his immediate removal, adding: "Brazil, which sent brave soldiers to combat Nazism on European soil, doesn't deserve it."