Brexit relationship: EU reveals clues ahead of talks with UK 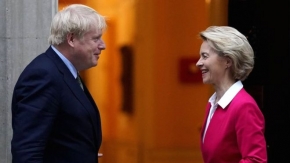 They say an army marches on its stomach. The European Union does it with slides. The EU negotiating team is gearing up for talks with the UK about the post-Brexit relationship

by holding a series of seminars for diplomats from the 27 member states.

The presentations are being published online. Stuffed with jargon and seriously lacking in inspirational clipart, they provide important clues about how things might play out.

Why PD is key
Remember the Political Declaration? Known in Brussels as "the PD", it's the 26-page sketch of the future relationship agreed alongside the 600-page Withdrawal Agreement, which settled the terms of the UK's departure.

It's clear that the EU takes the document as gospel because it's quoted at length in the slides. At length. Like it's the law.

EU officials are alert for signs that the UK might be softening on commitments made in the PD.

It's also a handy tool for keeping EU member states in line. For example, some have asked for other things to be added, to be told it's now too late.

So it's worth re-reading.

FTA, you say?
One of the sessions for diplomats was about the centrepiece of the new relationship with the UK - the Free Trade Agreement (FTA).

This presentation was full of the EU's usual catch-phrases about this stuff: being out can't be as good as being in, there's no way to replicate membership of the single market without the free movement of people, etc etc.

In the Theresa May era, this would read like a comprehensive rejection by Brussels of requests made by the UK.

It doesn't feel that way, now that there's a new British government which is relaxed about a looser economic relationship and can live with some friction in its trade with the EU.

What is the transition period?
Who is EU's powerful head Ursula von der Leyen?
But the EU thinks the UK still has to be reminded about what it can and can't get.

And the message on financial services in the slides is unambiguous: "not subject to negotiation."

That's because both sides will use existing ways of monitoring each other's regulations rather than inventing new ones.

A field with no ref, that's the LPF
Get used to another acronym - the LPF, or Level Playing Field.

This is a series of measures to manage economic competition with the UK, which the EU says is necessary to reduce the risk of it being undercut by British firms that benefit from the new free trade agreement.

The EU intends that the level playing field will cover taxation, labour relations and environmental policies, and government support for companies, known as "state aid."

The main tool will be a promise not to fall below current shared standards known as the non-regression clause.

But the EU has introduced an extra concept via the slides - "non-lowering".

At first this sounds the same as non-regression but it means that if one party raises standards then there's a possibility they may never be allowed to be lowered again. This goes beyond merely maintaining existing standards.

And the EU wants the UK to stay in lock-step with European policies on the environment and state aid as they develop.

It's described in the presentations to diplomats as an "ambition to improve over time", but in negotiating parlance is called "dynamic alignment".

This is a massive no-no for the British government and will likely cause a big row.

Jointly committed
The EU negotiators think this will all have to be managed and they place great importance on an "overarching governance framework", part of which would be a joint committee of ministers and officials.

According to the slides, one of its big tasks would be deciding how to apply new EU laws or initiatives that didn't exist when the deal was negotiated.

Another would be working out what to do when one side or the other diverged from where things started.

At the same time, the EU would develop its own tools to retaliate quickly if the UK did something deemed unacceptable.

This is at the heart of the deal the EU agreed with Switzerland (but which hasn't been approved yet) and my hunch is it'll be at the heart of what's negotiated with the UK.

Don't forget the fish
And finally, who could forget what access the EU will get to UK waters to catch fish, and British access to the EU market to sell it, billed as the biggest flashpoint?

The slides reiterate that a deal on trade is contingent on a deal on fish. What's not clear is how the two will be linked - either in the negotiation process or in the final agreements.

The EU says it will look at "socio-economic" factors - the real-world effect on fishing communities. That might be surprising if you think this should be a purely technical, environmental matter, but it reflects the importance of the sector in the European psyche.

Another key phrase is "relative stability". This is code for agreeing the broad outlines of how many fish can be caught over a long period of time, maybe decades. It means there might not be much to decide in annual fishing negotiations between the UK and the EU.

There are more presentations and a lot of details still to come. They might seem dull but today's slides are tomorrow's big news stories.