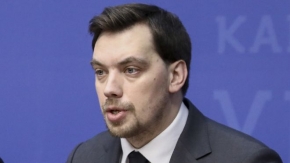 Ukraine's Prime Minister Oleksiy Honcharuk has tendered his resignation after a leaked audio recording apparently revealed him criticising the president.

A voice sounding like Mr Honcharuk's, but not officially confirmed as his, says President Volodymyr Zelensky only has a "primitive" grasp of economics.

Mr Honcharuk also appears to admit that he himself is not good at economics.

The audiotape affair comes at a difficult time for him, as his relations with President Donald Trump are under intense scrutiny. The US president is being impeached for allegedly trying to pressure Mr Zelensky into investigating political rival Joe Biden.

It remains unclear whether Mr Honcharuk genuinely intends to step down, Reuters news agency reports, quoting him as saying "do not jump to conclusions", when asked about his resignation.

The controversial audiotape was uploaded to an anonymous YouTube channel on Wednesday evening. Mr Honcharuk, 35, was apparently discussing the national budget with some other government ministers and finance chiefs.

Writing on social media, Mr Honcharuk said the recordings had been edited from several fragments of government meetings to create the false impression that he did not respect the president.

Mr Zelensky's office has confirmed receiving the resignation offer and says the president will now decide whether to accept it.

What this leak tells us
By Jonah Fisher, BBC Kyiv correspondent

It's unlikely that Ukraine's president Volodymyr Zelensky is really upset about the comments made by his Prime Minister.

Mr Zelensky's professional background is not as an economist but a comedian and a television producer.

His incredible rise to power last year was based around him being an "everyman" figure intent on honestly doing his best. He never claimed to have all the answers.

What may be of more concern for the president is what the leaking of the audio of a top level meeting tells us about his government.

It's confirmation that there are those either within the administration or in the security services determined to drive a wedge between him and a young reform minded Prime Minister.

It's long been known that President Zelensky's team are an uneasy mix of reformers and individuals with links to one of Ukraine's most powerful oligarchs Ihor Kolomoisky.

In a Facebook post, Mr Honcharuk wrote that Mr Zelensky was "a model of honesty for me", but "to remove any doubts about our respect and trust in the president, I wrote a resignation offer".

"He is a man in whom Ukrainians have expressed unprecedented confidence. And he has every right to evaluate the effectiveness of every member of his team."

Before joining the Zelensky team Mr Honcharuk worked as a commercial lawyer. He is the youngest prime minister in Ukraine's history.

In the audiotape, voices resembling those of top government officials can be heard discussing Ukraine's economic situation and the president's supposedly distorted understanding of it.

Some Ukrainian commentators have speculated that the leak may be a deliberate attempt to destabilise Mr Zelensky's government, and there are questions about its authenticity.

'We have no plans'
In an excerpt from the recording, broadcast by private news channel 112 Ukrayina, the voice attributed to Mr Honcharuk scorns the "Sorosite" reformers around President Zelensky - a reference to reformers backed by billionaire US financier George Soros, a major philanthropist in ex-communist eastern Europe.

"There used to be good business managers, under whom the [economic growth] was 4.6%. Then Sorosites came, and the economic growth is 2% and less. And you cannot prove anything to anyone," he said.

"And all of this, together, induces in the president a feeling that the situation is uncontrollable. We do not understand. We have no plans."

That bleak assessment is, however, contradicted by some recent reports on the Ukrainian economy.

Ukraine's state statistics service last month estimated output in 2019 at just over 3%, the highest rate for the past eight years.

Anders Aslund, a Ukraine expert at the Atlantic Council think-tank, says the budget deficit was reduced to 2% of GDP (total output) in 2019, inflation fell to 5% and the currency, the hryvnia, strengthened 19% against the US dollar.

Mr Honcharuk's government secured a $5.5bn (£4.2bn; €4.9bn) IMF loan programme in December, but the payments depend on Ukraine's progress in reforming the economy, especially in tackling the power of oligarchs.

More in this category: « Harry and Meghan: Boris Johnson 'confident' over future role Brexit relationship: EU reveals clues ahead of talks with UK »
Login to post comments
back to top