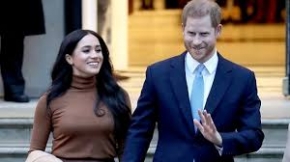 Prime Minister Boris Johnson says he is "absolutely confident" the Royal Family is going to "sort out" a future role for the Duke and Duchess of Sussex.

Harry and Meghan want to "step back" from being full-time working royals.

Mr Johnson told BBC Breakfast: "I think they'll sort it out all the easier without any commentary from me."

It came as Canadian Prime Minister Justin Trudeau said further talks were needed over who pays for Prince Harry and Meghan's security.

Mr Trudeau said the funding and shape of the couple's plans to relocate to North America are to be discussed.

The Queen has agreed a "period of transition" in which Prince Harry and Meghan will be in Canada and the UK.

She said she was "entirely supportive" of their desire for a new role but "would have preferred" them to remain full-time working royals.

In a statement following talks at Sandringham, the Queen's residence in Norfolk, on Monday involving senior royals, the Queen said she expected final decisions to be made in the coming days.

The Queen, the Prince of Wales, the Duke of Cambridge and Prince Harry attended the summit. Meghan - who is in Canada - did not participate, according to the Daily Mail and Hello! magazine.

In his first major TV interview following December's general election, Mr Johnson was asked by BBC Breakfast's Dan Walker what he thought of Prince Harry and Meghan's decision to "step back as 'senior members of the Royal Family" and divide their time between the UK and North America.

Mr Johnson said that while "everybody has got an opinion" on the situation, "the Royal Family is one of the great, great assets of this country and I'm sure they will sort it out".

When asked about media intrusion and whether there were any colonial undertones in the coverage of Meghan, the PM said: "I don't think this is helped by running commentary by politicians."

Questions over funding
Among the questions being asked about the Sussexes' future is who will fund their security.

Mr Trudeau said most Canadians were "very supportive" of having royals live there, but there were "still lots of discussions to have" over "how that looks and what kind of costs are involved".

He said the federal Canadian government had not been involved "up until this point" about what the couple's move to the country would involve.

Speaking to Global News, a Canadian TV network, he added: "There are still a lot of decisions to be taken by the Royal Family, by the Sussexes themselves, as to what level of engagement they choose to have.

"We are obviously supportive of their reflections but have responsibilities in that as well."

Earlier the Queen said the talks at Sandringham which also involved the Prince of Wales and the Duke of Cambridge, had been "very constructive".

"My family and I are entirely supportive of Harry and Meghan's desire to create a new life as a young family," she said.

"Although we would have preferred them to remain full-time working members of the Royal Family, we respect and understand their wish to live a more independent life as a family while remaining a valued part of my family."

She said it had been agreed there would be "a period of transition in which the Sussexes will spend time in Canada and the UK" after Harry and Meghan "made clear that they do not want to be reliant on public funds in their new lives".

How could Harry and Meghan make money?
The Sussexes' statement in full
Why Meghan and Harry have Canada in their sights
The urgent talks were convened after the Sussexes surprised the rest of the Royal Family last week with their statement.

They also said they wanted a "progressive new role" within the institution, where they would be financially independent.

Both Prince Harry and Meghan spoke of the difficulties of royal life and media attention in recent months, with the duke saying he feared his wife would fall victim to "the same powerful forces" that led to his mother's death.

'The Queen's regret is obvious'

This is a remarkably candid and informal, almost personal, statement from the Queen.

Her regret over Harry and Meghan's move is obvious - she would have preferred them to stay in their current roles.

But she also makes clear that they are still royals and that they will be valued in the family as they become a more independent couple.

There are buckets of questions outstanding - on their future royal role, their relationship with the rest of the Palace, on who will pay what (not, the Queen says, the taxpayer), and on how Harry and Meghan will support themselves.

There's still a lot to thrash out and to agree on. Not all of it may become public.

And it looks like the Queen sees this as a process, not an event. She writes of a transition period when Harry and Meghan divide their time between Canada and the UK.

The Queen has asked for decisions to be made over the next few days. But those decisions may well be up for review in the coming months and years.