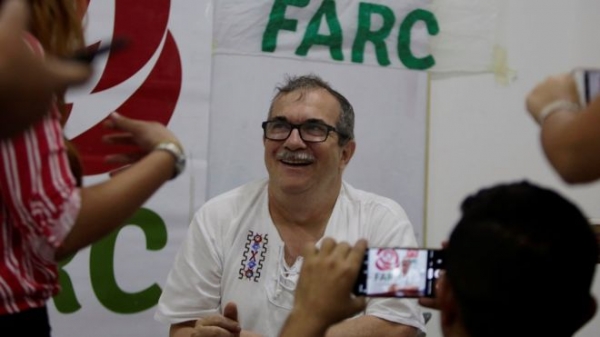 Colombian police say they have foiled an attempt to assassinate the former head of the now demobilised Farc rebels, Rodrigo Londoño Echeverri, better known as Timochenko.

Police said two would-be assassins were intercepted on a road in the west of Colombia on Saturday and killed.

The left-wing Farc group signed a historic peace accord in 2016 after four years of negotiations.

It has since formed a political party, which is also called Farc, led by Timochenko.

General Oscar Atehortua, director of Colombia's national police, told reporters that officers acting on a tip-off intercepted the two assassins close to a farm where Timochenko was staying on the border of the departments of Quindio and Valle del Cauca.

"A terrorist attack which sought to kill Rodrigo Londoño Echeverri, president of the Farc political party, was prevented," he said.

Gen Atehortua said the attempted assassination had been ordered by former Farc commanders Iván Márquez and Hernan Dario Velasquez, better known as El Paisa, who are believed to be hiding in Venezuela.

They rejected the peace deal, denouncing it as "a betrayal" and have again taken up arms.

Last year, President Iván Duque offered a reward for the rebel leaders and vowed to hunt them down.

Timochenko became commander of the Farc in 2011, when its then leader, known as Alfonso Cano, was killed by the Colombian armed forces.

More in this category: « Venezuela's Guaidó forces his way into assembly after stand-off Brazil's culture minister sparks outrage by echoing Goebbels »
Login to post comments
back to top