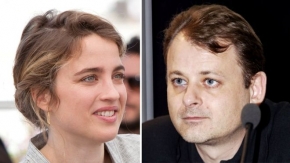 French film director Christophe Ruggia has been held in connection with allegations of sexual harassment made by award-winning actress Adèle Haenel.

Ruggia was arrested as part of an investigation into "sexual aggression on a minor", police said on Tuesday.

Haenel, who is now 31, was only 12 when she was cast in Ruggia's film Les Diables (The Devils).

The actress alleges Ruggia harassed her as a young teenager when they travelled together to promote the film.

Her comments shook the French film industry when they were first reported last November, following an investigation by the Mediapart news website.

Ruggia, who is now 55, was placed in police custody on Tuesday morning. He has previously denied the allegations.

What are the allegations?
According to Mediapart's investigation - which included around 30 other witnesses - Ruggia is said to have developed an obsession with Haenel during the filming of the 2002 film Les Diables.

Other actors and technicians on the set at the time spoke of the unhealthy atmosphere.

Then, when filming had finished and the pair were travelling together to promote it, Ruggia is said to have invited her to his home.

Haenel said that this was where he first touched and tried to kiss her, and told her of his love.

At 15, she tried to cut off links with Ruggia and sought help from people in his entourage - but few, she said, showed sympathy.

Haenel, who has appeared in more than 25 films and twice won Cesar awards - France's equivalent of the Oscars, said she decided to speak out after watching the documentary Leaving Neverland, which explored the singer Michael Jackson's relationships with children.

"It changed my perspective," she said, adding: "It made me see I had too long clung to the version of Christophe Ruggia, that it had all been a story of love… It made me understand the mechanisms of control and fascination."

She lodged a formal complaint against Ruggia in November and the public prosecutor opened an investigation into "sexual aggression on a minor carried out by someone in authority".

Ruggia has denied the charges of sexual molestation, but has admitted to having made "errors" in his conduct towards Haenel.

"I did not see that my adulation for her, and the hopes I placed in her, might - given her young age - come across at times as irksome. If this is what happened... I ask her pardon," he said in an earlier statement.