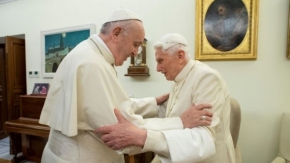 Retired Pope Benedict XVI has issued a defence of priestly celibacy in the Catholic Church as his successor considers easing a ban on married men serving as priests.

Pope Benedict made the appeal in a book co-authored with Cardinal Robert Sarah.

It comes in response to a proposal to allow married men to be ordained as priests in the Amazon region.

Pope Benedict, who retired in 2013, said he could not remain silent on the issue.

In the book, Pope Benedict says celibacy, a centuries-old tradition within the Church, has "great significance" because it allows priests to focus on their duties.

The 92-year-old says "it doesn't seem possible to realise both vocations [priesthood and marriage] simultaneously".

It is rare for Pope Benedict, who was the first pontiff to resign in almost 600 years, to intervene in clerical matters.

The Vatican is yet to comment on the book, which was previewed in part by French newspaper Le Figaro before its full publication on Monday.

Vatican commentators have reacted with surprise to Benedict's intervention, suggesting it breaks with convention.

"Benedict XVI is really not breaking his silence because he (and his entourage) never felt bound to that promise. But this is a serious breach," Massimo Faggioli, a historian and theologian at Villanova University, tweeted.

The comments by Pope Benedict were described as "incredible" by Joshua McElwee, a journalist for the National Catholic Reporter.

A theological conservative with traditional views on Catholic values, Pope Benedict pledged to remain "hidden from the world" when he retired, citing poor health.

Pope Benedict XVI to resign citing poor health
Why did Pope Benedict XVI resign?
But since then, he has made his views known in articles, books and interviews, advocating a different approach to Pope Francis, who is seen as more progressive. Pope Benedict still lives within the walls of the Vatican in a former monastery.

What is the proposed change to priestly celibacy?
In October, Catholic bishops from around the world gathered for a meeting, known as the synod, to discuss the future of the Church in the Amazon.

At the conclusion of that meeting, a document detailing issues affecting the Church was released. In it, there was a suggestion that in remote parts of the Amazon, older, married men should be ordained.

South American bishops have advocated this in an effort to address the shortage of priests in the region.

Pope Francis will consider it, along with many other proposals, including the environment and the role of women in the Church. He is expected to make a decision on the matter within the next few months.

There are already some exceptions, such as priests in Eastern Catholic Churches and Anglican priests who convert.

For many, celibacy is a key part of being a Catholic priest, who is supposed to devote himself to the church and not be distracted by what some consider to be worldly concerns like a wife or a family.

For traditionalists, this is about the direction in which Pope Francis is taking the Church.

Some critics regard the idea of allowing married priests in the Amazon as a pretext to abolishing celibacy as a requirement altogether.

Despite having vowed to remain "hidden from view" following his sudden retirement in 2013, it is difficult not to regard former Pope Benedict XVI's intervention as a strategically timed appeal to Pope Francis to refrain from changing the rules on celibacy.

This is also a collision between the ancient belief that celibacy is exemplified in the life of Christ and the ministry of Apostle Paul, who wrote in his First Epistle to the Corinthians that "I wish all people were like me", and the demands of a modern church that is growing across the Amazon region but where there is a severe shortage of priests.

The Vatican offered no comment on the book nor did they specify when Pope Francis might respond to the proposal.

But Pope Francis has indicated, through Papal visits and his appointment of cardinals, that he recognises where the Roman Catholic Church is growing and wants to respond to its needs.

His decision on whether to accept the Amazon bishops' request is therefore eagerly awaited and is expected in the next few weeks.

What is the relationship between the two popes?
When Pope Benedict resigned in 2013, it was the first time in 600 years that the Catholic Church gained two living popes.

Since then, Benedict has largely remained silent on issues of faith, but differences in the two popes' approaches have emerged, with Francis' image as a reformer contrasting with more traditionalist elements within the Church.

The first major change came when Pope Benedict wrote a letter last year blaming the Church's sexual abuse scandal on the sexual revolution of the 1960s, in a direct contrast to Francis' public stance.

On a smaller scale, Francis has rejected a number of traditions, including his predecessor's famed red shoes.

Public interest in the relationship between the two men has peaked recently with Netflix's release of The Two Popes, starring Anthony Hopkins and Jonathan Pryce, in December.