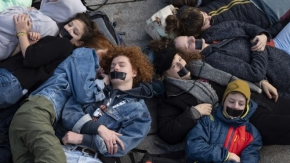 German engineering giant Siemens says that despite protests by climate activists it will fulfil a deal to help develop a huge coal mine in Australia.

The controversial open-cast mine in Queensland, owned by India's Adani group, is to go operational next year.

Siemens CEO Joe Kaeser said "we should have been wiser about this project", but "we need to be a supplier who sticks to its commitments".

Extinction Rebellion activists have protested outside Siemens HQ in Munich.

There have also been protests by environmentalists in Australia against the Carmichael mine project, seen as damaging because of the contribution of fossil fuels to global warming.

International concern
With a planned annual output of up to 60m tonnes it is set to become one of the world's biggest coal mines.

The intensity of the bushfires ravaging Australia has been linked to an exceptional heatwave, and such conditions will be all too common if the world remains reliant on coal and other fossil fuels, experts say.

There is already huge concern about the Great Barrier Reef off the Queensland coast, where precious corals have been killed by pollution and coral-eating starfish. Coal ships sail from Queensland to China, India and other Asian markets.

There are also fears that rising sea temperatures could accelerate the destruction of coral reefs.

Australia is the world's second-biggest thermal coal exporter, after Indonesia.

Australian supporters of the Carmichael mine project say it will bring much-needed jobs to rural Queensland.

Pressure on Siemens
Siemens has a contract worth €18m (£15m; $20m) to supply railway signalling equipment for the mine.

Teenage climate activist Greta Thunberg has urged Siemens to review the contract, and Fridays for Future activists plan to demonstrate against the deal again on Monday.

In a statement released on Sunday, Mr Kaeser said Siemens "fundamentally shares the goal of making fossil fuels redundant to our economies over time".

But he said "there is practically no legally and economically responsible way to unwind the contract" with Adani.

Siemens could however pull out in future "if our customer violates the very stringent environmental obligations".

He said Siemens would set up "an effective Sustainability Board to better manage environmental care in the future".

More in this category: « Varadkar and Martin to meet amid election speculation Retired Pope Benedict warns Francis against relaxing priestly celibacy rules »
Login to post comments
back to top