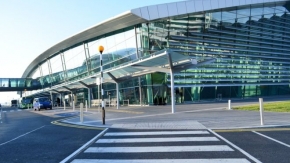 Two men have been arrested on suspicion of false imprisonment after a minibus was stolen from Dublin Airport.

The bus was taken from outside Terminal 2 early on Wednesday with three passengers on board, and driven north on the M1 motorway.

The suspects rammed both a PSNI car and garda car in a cross-border chase involving specialist armed police and a helicopter.

Nobody was injured in the incident, which began about 01:00 local time.

It is understood the bus - believed to be a hotel shuttle - was taken when the driver was helping a passenger outside the terminal.

Gardaí (Irish police) said the three passengers - understood to be from Navan, County Meath - were dropped off unharmed on the M1 near Julianstown.

The minibus then continued to Drogheda, County Louth, pursued by garda units, before crossing the border near Dundalk.

After damaging the front of a PSNI vehicle in Crossmaglen Square, the minibus crossed back over the border.

No PSNI officers were injured during the incident, police confirmed.

The minibus was pursued again by gardaí in County Monaghan, before it crashed and the men fled on foot.

The two men, who are both in their thirties, then took control of a parked car.

It was pursued by a garda specialist armed support unit and the garda helicopter, before being stopped in Castleblayney, County Monaghan.

Anyone with information about the incident is advised to contact Irish police.

More in this category: « Spain's Sánchez narrowly wins vote to govern in coalition 'Child stowaway' found dead in plane's undercarriage in Paris »
Login to post comments
back to top