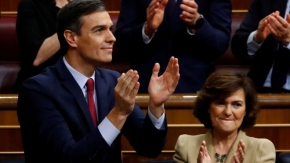 The dramatic open vote, by a simple majority of MPs, went 167 to 165 in his favour. Abstentions by Catalan and Basque MPs played a critical role.

He will now form a minority government.

It will be Spain's first coalition government since democracy was restored in 1978, after the Franco dictatorship.

The fragmented 350-seat parliament makes the passage of legislation difficult, as his Socialist Party (PSOE) has 120 seats and Podemos 35 - short of a majority.

'Only option' for Spain
The vote - or abstention - of each MP in turn was read out in the chamber and broadcast live on TV. It was extremely close, and right up to the end the "no" votes were ahead.

Addressing MPs before the vote, Mr Sánchez said such a coalition was "the only option" for Spain, after five elections in recent years.

"Either a progressive coalition, or more deadlock for Spain," he warned them.

On Sunday Mr Sánchez lost a first confidence vote, when he failed to get an absolute majority in parliament to form a coalition government.

Pedro Sánchez: The rise of Spain's accidental PM
The extraordinary nature of this vote is underlined by the case of Aina Vidal, a Podemos MP who is in severe pain with cancer and had to miss Sunday's vote. She turned up for Tuesday's crucial vote, despite her illness.

After the vote MPs presented Ms Vidal with a big bunch of flowers and applauded her, shouting "yes we can" - echoing Barack Obama's catch-phrase. "Podemos" in Spanish also means "we can".

She said MP Tomás Guitarte of the small Teruel Existe party had suffered so much pressure that he concealed his whereabouts out of fear. She said he had received more than 8,000 emails urging him to vote "no" instead of "yes".

The PSOE struck a deal which secured the narrow win for Mr Sánchez: the 13 MPs from Catalonia's largest separatist party, the ERC, agreed to abstain, as did the five from a Basque party, Bildu.

The ERC decision came after Mr Sánchez agreed to open a formal dialogue on the future of Catalonia if he is confirmed as prime minister, and to then submit the dialogue's conclusions to Catalan voters.

The Catalan separatists' drive for independence overshadows Spanish politics, with the conservative and far-right opposition parties bitterly opposed to it.

'Toxic' politics
Mr Sánchez said he wanted to free Spanish politics of its "toxic atmosphere". He said dialogue was necessary to "overcome the territorial disputes, always in line with the constitution".

The PSOE is also opposed to granting Catalans a legal independence referendum, while recognising that both Catalonia and the Basque Country are nations within Spain, and not just regions. The Catalans and Basques already have a large degree of autonomy.

He accused Mr Sánchez of acting as an "extremist" - not a moderate - by allying himself with the far left and the Basque and Catalan nationalists, without explaining that to the Spanish people.

"You lied and this stigma accompanies the government at its birth," he said.