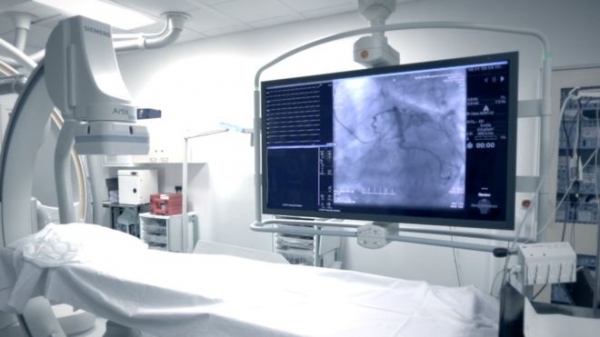 European clinical guidelines on how to treat a major form of heart disease are under review following a BBC Newsnight investigation.

Europe's professional body for heart surgeons has withdrawn support for the guidelines,

saying it was "a matter of serious concern" that some patients may have had the wrong advice.

Guidelines recommended both stents and heart surgery for low-risk patients.

But trial data leaked to Newsnight raises doubts about this conclusion.

Thousands of people in the UK and hundreds of thousands worldwide will be treated for left main coronary artery disease each year. This is a narrowing of one of the main arteries in the heart.

The guidelines on how to treat it were largely based on a three-year trial to compare whether heart surgery or stents - a tiny tube inserted into a blocked blood vessel to keep it open - was more effective.

The trial called Excel started in 2010 and was sponsored by big US stent maker, Abbott.

It was led by eminent US doctor Gregg Stone and aimed to recruit 2,000 patients. Half were given stents and the other half open heart surgery.

Success of the treatments was measured by adding together the number of patients that had heart attacks, strokes, or had died.

In 2016, the results of the trial for patients three years after their treatments were published in the prestigious New England Journal of Medicine. The article concluded stents and heart surgery were equally effective for people with left main coronary artery disease.

But researchers had failed to publish data for the common, "Universal" definition of a heart attack.

Newsnight has seen that unpublished data and it shows that under the universal definition, patients in the trial that had received stents had 80% more heart attacks than those who had open heart surgery.

The lead researchers on the trial have told Newsnight that this is "fake information". But Newsnight has spoken to experts who say they believe the data is credible.

Prof Rod Stables, clinical lead for research at the British Heart Foundation, said this information should have been published and knowing it would have made a "substantial contribution to our ability to appreciate the nuances of the results".

Shortly after Excel was published, the professional bodies for heart surgeons and cardiologists got together to write a new set of guidelines.

But they had not seen the unpublished Universal definition data.

Currently, European guidelines recommend either a stent or open heart surgery for people who have less severe forms of this disease.

The European Association for Cardio-thoracic Surgery (EACTS), which helped draw up the guidelines, told Newsnight if the information on the trial is proven to be correct, "the recommendation is unsafe".

"It is a matter of serious concern to us that some results in the Excel trial appear to have been concealed and that some patients may therefore have received the wrong clinical advice," Prof Domenico Pagano, EACTS secretary general, said.

Newsnight has also learned that as the guidelines were being drawn up, the trial's Data Safety Monitoring Board - an independent body that looks after the interests of patients - was raising concerns.

Newsnight has seen emails where they raised concerns about the higher mortality rate amongst those patients who were receiving stents.

The board thought this information should be made public, as they were aware new guidelines were being drawn up that would recommend stents or surgery.

However, the main investigators chose not to do so at the time. They point out that the board allowed the trial to continue unchanged.

Prof Nick Freemantle worked on the guidelines. He told Newsnight he would "never" have agreed the treatments were interchangeable if he had seen the leaked data.

He said that the result of making the "wrong recommendation" is that "patients who have received stents [for left main coronary artery disease] will have died who otherwise would have lived for longer, survived for longer, if they'd had open heart surgery".

The European Society of Cardiology, the other professional body involved in writing the guidelines, rejected the claim that the guidelines may have caused harm to patients. They stand by the guidelines, which they say were based on more than the Excel trial.

'Dangerous for patients'
This year the trial published a further set of its results, showing what had happened to the patients five years after their treatment.

This found for every 100 who died after having open heart surgery, 135 people with stents died. Overall, 10% of people who had surgery died in the trial compared with 13% who had stents.

Prof David Taggart, a surgeon at Oxford University, resigned from the trial. He says he "had no choice" as he believed the academic paper describing the five-year results did not give enough prominence to the mortality data in the trial.

The NEJM had recommended that the researchers should give it greater prominence too.

Prof Taggart said he believed the paper's final paragraph, which concluded that there was "no significant difference" between stents and open heart surgery was "dangerous for patients".

When challenged by Newsnight, the trial's principal investigator, Dr Gregg Stone, said he believed that it had been given sufficient prominence and had been considered to meet NEJM's standards.

Sponsors of trials like this are also responsible for making sure all results are published.

When Newsnight contacted Abbott, the sponsors of the trial, they directed the BBC towards the trial's main researchers.

The EACTS has now urged their members to "disregard the guidelines relating to left main disease for the time being".

"We recommend that patients seek the advice of the multidisciplinary heart team at their hospital before deciding which treatment option is most appropriate for them," said Prof Domenico Pagano.

There is one school of thought that says they raise questions and need to be carefully managed because of potential bias - conscious or unconscious.

Others say that interactions between research and business are vital and there is a real public good to be gained by them.

In the Excel trial, the four main investigators all declared conflicts of interest.

Lead investigator Prof Gregg Stone declared he had received personal fees or held equity in 20 private medical companies, several of which made tools that helped with putting in stents.

He's also the course director for TCT, an annual medical conference where the results were presented.

TCT makes money from exhibitors including some of the biggest stent makers - Abbott, who sponsored the trial, Boston Scientific and Medtronic.

By Newsnight's count, around half of the investigators on the trial had declared personal fees from companies that made stents, and around a third of those on the taskforce writing the guidelines.

More in this category: « 'Global epidemic' of childhood inactivity Many at risk of flu this Christmas, experts say »
Login to post comments
back to top