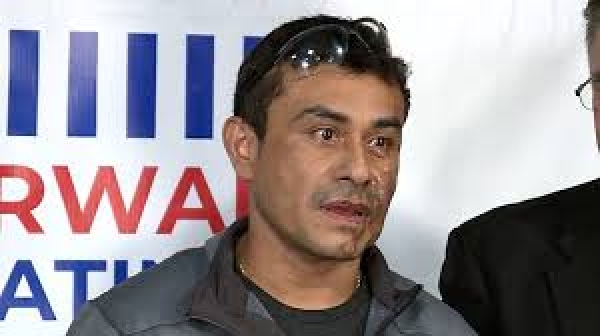 Police in Wisconsin have charged a man with a hate crime after a Peru-born US citizen had acid thrown in his face and was told to go back to his country.

Mahud Villalaz, 42, suffered second-degree burns to his face on Friday in a dispute over a parking spot in Milwaukee, says a criminal complaint.

Clifton Blackwell, 61, is charged with first-degree reckless injury in a hate crime using a dangerous weapon.

Mr Villalaz became a US citizen in 2013.

No hate crime in 'kill a Mexican' attack
'I fear my neighbour' - hate crimes in America
According to the complaint, Mr Villalaz had parked his car outside a restaurant and was walking towards the entrance when Mr Blackwell approached him.

Mr Blackwell allegedly shouted at Mr Villalaz, "Why did you invade my country?" and, "Why don't you respect my laws?"

He then reached for a metal bottle containing the acid mixture, according to the complaint.

Security camera footage from outside a restaurant shows Mr Villalaz arguing with Mr Blackwell, who throws liquid in his face.

Mr Villalaz told BBC's US affiliate CBS News: "He just approached me with those hated words, 'Go back to your country.'"

He added that the liquid, which he believes was battery acid, burned through two layers of his clothing.

If convicted on all three counts, Mr Blackwell could face up to 35 years in jail.

The charge of first-degree reckless injury carries a maximum sentence of 25 years, with an additional five years each for using a dangerous weapon and committing a hate crime.

Speaking to reporters on Wednesday, Mr Villalaz said he was feeling better and would like to move on from the incident.

"It has been wonderful to see that there are many people who worry about others, not only Latinos but white people... everybody," the welder said in Spanish, according to CNN.

"Let's unite and live in peace with our neighbours."