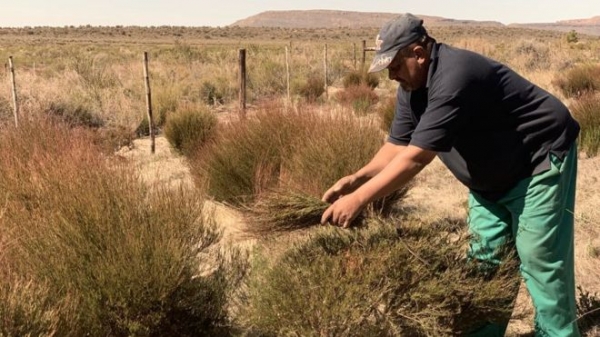 The industry behind the herbal tea rooibos has agreed to pay a percentage of the money that is made to the indigenous people who used the plant before production was industrialised.

South Africa's KhoiSan people will now receive 1.5% of the value farmers get when they sell to the tea processor.

The lawyer representing the San people told the BBC the industry-wide agreement is a "world first".

"It has huge ramifications for the indigenous world and also for other industries where many many people can be brought under one agreement," Roger Chennells told the BBC.

The agreement was signed on Friday between South Africa's environment minister, the National KhoiSan Council, the San Council of South Africa and the South African Rooibos Council.

Get the latest updates from Africa live
Rooibos only grows in the Suid Bokkeveld region of South Africa.

At the turn of the 20th Century, under colonial rule, Rooibos farming was made into a commercial venture.

But it was first discovered centuries ago by the indigenous KhoiSan people who used it as a herbal remedy.

'Issue of dignity'
The KhoiSan are South Africa's oldest inhabitants and are made up of a number of related communities: The Cape Khoi; the Nama; the Koranna; the Griqua and the San - who also often refer to themselves as bushmen.

Lesle Jansen, from environmental and human rights law firm Natural Justice, told the BBC that this agreement is not just about money but about recognition.

"This was very much a dignity issue and the recognition by the industry that the Khoi and San are the knowledge holders to the uses of rooibos."

Descendants of Khoi people who live in rural farming communities in rooibos growing areas will get a portion of the money after it has been distributed in equal parts to the San Council and National KhoiSan Council, reports South Africa's Mail and Guardian.

• Mean red bush in Afrikaans - from the plant's stem

• Main export markets are UK, Germany, Netherlands, the US and Japan

• Contains a wealth of minerals, including zinc, copper, calcium, magnesium and potassium

More in this category: « Zimbabweans march against EU and US sanctions France returns Omar Tall's sword to Senegal »
Login to post comments
back to top