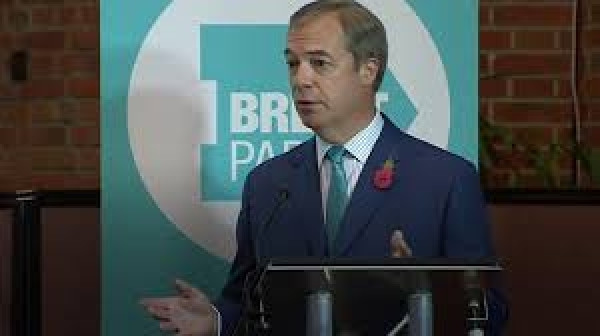 Nigel Farage has called on Boris Johnson to drop his Brexit deal or face his party's candidates in every seat.

Speaking at the Brexit Party's election campaign launch, he called on the PM to "build a Leave

alliance" and seek a free trade agreement with the EU.

If Mr Johnson refuses, Mr Farage said he already had 500 candidates he could field against the Tories in seats across England, Scotland and Wales.

The Conservatives have consistently ruled out a formal pact with the party.

A Tory source told the BBC: "A vote for Farage risks letting Jeremy Corbyn into Downing Street via the back door. It will not get Brexit done and it will create another gridlocked Parliament that doesn't work."

It comes after President Donald Trump said Mr Farage and Boris Johnson should team up as "an unstoppable force".

LIVE: Brexit Party campaign launch
What is in Boris Johnson's new Brexit deal?
Could US companies run NHS services after Brexit?
Jeremy Corbyn vows to 'transform' UK
Recent opinion polls have shown the Conservatives with a double-digit lead over Labour.

Polling expert Sir John Curtice said Boris Johnson had received a boost after he negotiated a deal with the EU and brought the deal back to Parliament before 31 October deadline.

However, MPs turned down his plan to pass the deal in three days, leading to a three month extension to the deadline - something vocal Brexiteers, including Mr Farage, have criticised the PM for.

Having not got Brexit through by Halloween, some Tories fear that Mr Farage's candidates could split the pro-Brexit vote and prevent their party from winning a majority in 12 December poll.

Mr Farage used the launch to condemn the PM's deal, urging him to "drop [it] because it is not Brexit".

Instead, Mr Farage urged him to pursue a free trade agreement with the EU - similar to the deal the bloc has with Canada - and to impose a new deadline of 1 July 2020 to get it signed off.

If an agreement was not done by then, the UK should leave the EU without a deal and move to World Trade Organisation trading rules.

"I would view that as totally reasonable," he said. "That really would be Brexit."

But Mr Farage said if Mr Johnson did not pursue the route, the Brexit Party would contest every seat in the country - with 500 candidates ready to sign the forms to stand on Monday.

"The Brexit Party would be the only party standing at these elections that actually represents Brexit," he said.

But Tory Brexiteer Mark Francois said Mr Farage's pitch for an alliance had "screwed it up".

"If you genuinely want to work with another party, you don't go on live national television and call them liars," he told BBC Radio 4's World at One.

He said the PM's agreement with the EU was not a "perfect deal", adding: "We are not in Valhalla here. But the deal takes us out of the European Union.

"Nigel is a very talented politician but anyone who works with him will tell you he is his own worst enemy and his ego has got the better of him."

Nigel Farage has, in effect, given Boris Johnson an ultimatum - abandon your central Brexit policy or the Brexit Party will challenge your deal at every opportunity across the country.

With the prime minister highly likely to refuse, it seems Mr Farage will have to live up to his promise of fielding 500 or more candidates in this election by Monday - and his claim that he has the resources to do so.

That's a tall order for a party that only launched in April.

He's no doubt buoyed by the Brexit Party's success in the European elections earlier this year.

But in the past, when at the helm of UKIP, Mr Farage has struggled to turn popular support into Westminster seats.

He has been targeting Labour leave areas in Wales, the Midlands and the North of England - the very seats Mr Johnson has in his sights.

But the risk for both parties is by splitting the Leave vote they give Jeremy Corbyn an unintended boost.

Mr Farage also attacked Labour for a "complete and utter betrayal on Brexit" - and said his party would target Labour seats in the Midlands and North of England.

He said Labour's plan to renegotiate a deal then put it to a referendum was offering a choice of "remain or effectively remain".

Mr Farage said there were five million Labour voters who had supported Leave in the 2016 EU referendum - although that is likely to be an overestimate - meaning his party "posed a very major problem" for Jeremy Corbyn.

"So many Labour Leave seats are represented by Remain members of Parliament," he said. "We view those constituencies around the country among our top targets."

He ridiculed the reported Conservative plan to target "Workington man" - Leave-supporting traditional Labour voters in northern towns - saying Tories needed to get out of London more.

On the other side of the Brexit debate, Remain-supporting parties have been negotiating electoral pacts in certain constituencies.

The potential agreements would see the Liberal Democrats, Greens and Plaid Cymru stand aside for each other to ensure the election of as many MPs who back a second Brexit referendum as possible.

Green Party co-leader Jonathan Bartley said it was "no secret" that the his party was "talking to the Lib Dems and Plaid" but "nothing has been finalised".

Elsewhere on the election trail:

Both the Tories and Labour are fighting off criticisms from US President Donald Trump
No 10 has defended the PM's Brexit deal - which Mr Trump said would hamper any deal with the US - saying it would allow the UK "strike free trade deals around the world"
Jeremy Corbyn accused the president of trying to "interfere" in the election after he said the Labour leader would be "so bad" as PM
The SNP's leader and First Minister of Scotland, Nicola Sturgeon, has been campaigning in Leith
She said the upcoming election was a chance for Scotland to "escape the Brexit chaos" and become an independent EU country
Meanwhile, a poll by Teacher Tapp found one in 12 primary school teachers say nativity plays and Christmas concerts will be disrupted by the election

More in this category: « Labour to back early general election General election 2019: Labour and Tories pledge more borrowing »
Login to post comments
back to top