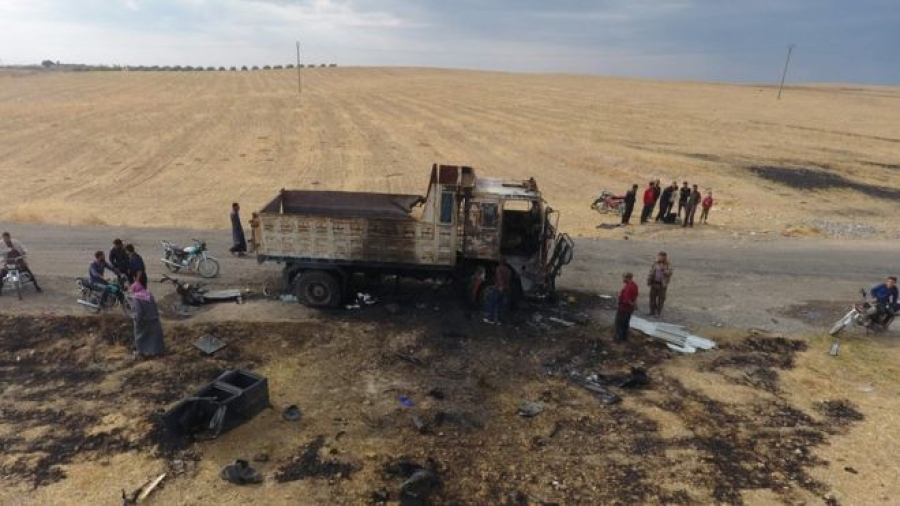 The jihadist group Islamic State (IS) has for the first time confirmed the death of its leader, Abu Bakr al-Baghdadi, and named his successor.

An IS outlet announced on the messaging service Telegram that Abu Ibrahim al-Hashemi al-Qurashi was the group's new leader and "caliph".

US special forces tracked down Baghdadi in north-west Syria at the weekend and attacked his compound.

The IS leader fled into a tunnel and killed himself with a suicide vest.

The Iraqi had a $25m (£19m) bounty on his head and had been pursued by the US and its allies since the rise of IS five years ago.

Who was Abu Bakr al-Baghdadi?
What we know about the US raid
IS also confirmed on Thursday the death of spokesman Abu al-Hasan al-Muhajir - who was killed in a joint operation in northern Syria by US and Syrian Kurdish forces hours after the one targeting Baghdadi. The Saudi national had been considered a potential successor.

Who is Abu Ibrahim al-Hashemi al-Qurashi?
Hashemi's name is not known to security forces, and is believed to be a nom de guerre.

IS did not provide many details about the new leader or release a photo, but it did describe him as a "prominent figure in jihad".

The statement also claimed Hashemi was a veteran jihadist fighter who had fought against the US in the past.

With the name "al-Qurashi", the group also made clear that he claims to be descended from the Prophet Muhammad's Quraysh tribe - something generally held by pre-modern Sunni scholars as being a key qualification for becoming a caliph.

Before the announcement, BBC jihadist media specialist Mina al-Lami said: "If IS chooses to appoint someone who is not a Qurashi, then perhaps it is an implicit acknowledgement that the 'caliphate' is no more."

What is the context?
IS declared the creation of a "caliphate" - a state governed in accordance with Sharia, or Islamic law - after seizing control of huge swathes of Iraq and Syria in 2014 and imposing its brutal rule on millions of civilians.

It proclaimed Baghdadi as "Caliph Ibrahim" and demanded allegiance from Muslims worldwide.

Despite the demise of its physical caliphate in March, IS remains a battle-hardened and well-disciplined force whose enduring defeat is not assured.

In his statement, IS's new spokesman said the group's Shura Council met soon after Baghdadi's death was confirmed and pledged allegiance to Hashemi.

What happened to Baghdadi?
The day before IS released the name of its new leader, the US military made public more information about the killing of Abu Bakr al-Baghdadi during a raid in Syria's Idlib province early on Sunday.

In grainy footage, helicopters were seen firing at gunmen on the ground as they flew towards a compound where Baghdadi was hiding.

On landing, US special forces commandos blew holes in the walls of the compound and called on Baghdadi to surrender, the military said. But he fled into a tunnel and detonated a suicide vest, killing himself and two children he had taken with him.

"You can deduce what kind of person it is based on that activity," said the head of US Central Command, Gen Kenneth McKenzie.

After the raid, the compound was destroyed in an air strike.

Gen McKenzie said the destroyed buildings were left looking like "a parking lot with large potholes".

He added that he could not confirm President Donald Trump's graphic description of Baghdadi whimpering and crying as he died.

More in this category: « Lebanon crisis: President asks Hariri to stay on as caretaker PM Iraq unrest: Protesters attack Iranian consulate in Karbala »
Login to post comments
back to top