Millions of masks distributed to students in 'gas chamber' Delhi 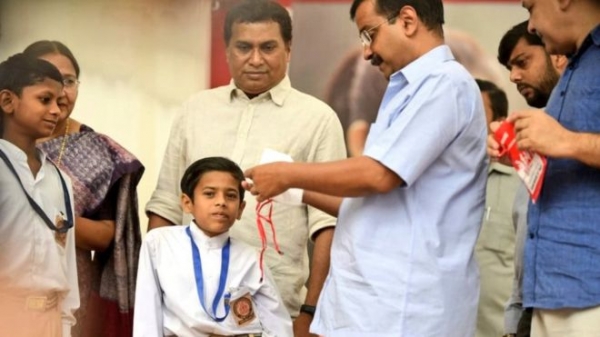 Five million masks are being distributed at schools in India's capital, Delhi, after pollution made the air so toxic officials were forced to declare a public health emergency.

All construction has been halted for a week and fireworks have been banned.

The city's schools have also been closed until at least next Tuesday.

The masks are being handed out to students and their parents, and Mr Kejriwal has asked people to use them as much as possible.

Delhi smog: Foul air came from India's farming revolution
Tackling pollution from stubble burning in India
As thick white smog blanketed the city, residents started tweeting pictures of their surroundings. Many are furious that the situation remains the same year after year.

One of the main reasons for air quality in the city worsening every year in November and December is that farmers in the neighbouring states of Punjab and Haryana burn crop stubble to clear their fields. It's made worse by the fireworks during the Hindu festival of Diwali.

There are other reasons too, including construction dust, factory and vehicular emissions, but farm fires remain the biggest culprit.

More than two million farmers burn 23 million tonnes of crop residue on some 80,000 sq km of farmland in northern India every winter.

Using satellite data, Harvard University researchers estimated that nearly half of Delhi's air pollution between 2012 and 2016 was due to stubble burning.

The burning is so widespread that it even shows up in satellite photos from Nasa.