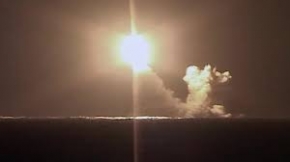 Footage captured overnight shows the release of the so-called Bulava missile from an underwater position in the White Sea, the ministry said.

It was fired from Russia's new Prince Vladimir submarine and was reported to have travelled thousands of kilometres.

The submarine is expected to be operational by the end of the year.

Completed in the early hours of Thursday, the Bulava missile launch - the first of its kind from the Prince Vladimir - was one of many weapons tests expected to take place in the coming weeks.

The missile successfully travelled from the White Sea in the north-western Arkhangelsk region to the Kura missile test range in Russia's far east, the defence ministry said in a statement.

"The flight of the missile took place as normal," the ministry said, adding that it arrived at the test site on time.

US-Russia surveillance flights treaty under threat
US pulls out of nuclear treaty with Russia
The Prince Vladimir submarine is expected to be supplied to the Russian navy in December, the Moscow Times reported.

It added that Russia was planning to build 10 similar submarines by 2027.

The test-firing of a Bulava intercontinental ballistic missile (ICBM) from the submerged Borei class submarine - Prince Vladimir - is a powerful reminder of the pace and scale of Russia's nuclear modernisation.

The Prince Vladimir is an improved version of the class, reportedly with additional missile tubes (giving it the capability to carry up to 20 missiles) and a variety of improvements to reduce its acoustic signature.

The Bulava ICBM can be armed with six to ten warheads per missile and has a range of some 8,300 km. It is specifically designed to evade western anti-missile defences.

The announcement that testing of the heavy land-based RS-28 Sarmat ICBM with payloads will begin next year is just another sign of the emphasis that President Vladimir Putin is placing on Russia's nuclear forces.

While the US, too, has ambitious modernisation plans, it lags behind Moscow's comprehensive effort, with Mr Putin seeing his missile inventory as a key indicator of great power status.

It comes amid reports (in Russian) that Russia is preparing to conduct further tests early next year of its new liquid-fuelled Sarmat missile, commonly referred to as Satan 2, according to Russian business daily Vedomosti.

The missile was one of six new Russian strategic weapons unveiled by Mr Putin in his annual state of the nation address to parliament in March 2018.