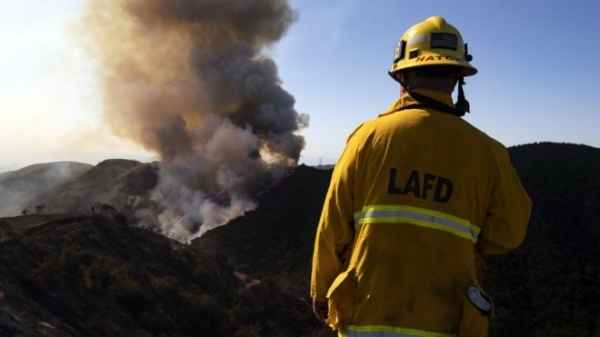 Winds are already nearing 70mph (113km/h) and there is concern they will fan the Getty fire, which has already burned through 658 acres.

Some 1,100 firefighters are tackling the blaze and thousands of structures are at risk, authorities say.

At least eight homes have been destroyed and five others damaged in the Getty Fire, named for the art collection close by. About 15% of the fire has been contained.

Winds are expected pick up early on Wednesday and continue into Thursday, with forecasters warning that they could hit their highest speeds of the season.

California faces huge power cuts as wildfires rage
California fires 'can now happen any year'
Why do Santa Ana winds make wildfires worse?
"This Santa Ana wind event will likely be the strongest we have seen so far this season," the weather service said.

On Tuesday fire chief Ralph M Terrazas said he was very concerned by the threats the winds posed.

"It does take one ember, just one ember downwind, to start another brush fire," he told reporters - adding that embers have been known to travel several miles in winds.

Los Angeles Mayor Eric Garcetti said that the 7,000-plus residents evacuated so far should not plan on returning home until conditions were safe.

Basketball star LeBron James and actor-turned-politician Arnold Schwarzenegger are among those who have evacuated their homes.

On Tuesday, James sent a taco truck to feed a number of firefighters tackling the Getty Fire.

The Getty Center, which houses a large art collection, is also at risk.

The museum said in a tweet that the art was "protected by a state-of-the-art technology" and that the safest place for it was inside.

Authorities say the Getty Fire was probably caused by a tree branch falling on power lines in the high winds.

A number of wildfires have broken out in the state over the last week. The Kincade Fire in northern California has burned through more than 75,000 acres.

Thousands of people have been left without power as companies shut off electricity to prevent a further outbreak of fires.

Currently, about 15% of the fire is contained. Over 80,000 homes are still threatened by the blaze.

More in this category: « Facebook agrees to pay Cambridge Analytica fine to UK Trump switches permanent residence from New York to Florida »
Login to post comments
back to top