US extends deadline for Salvadoreans to leave 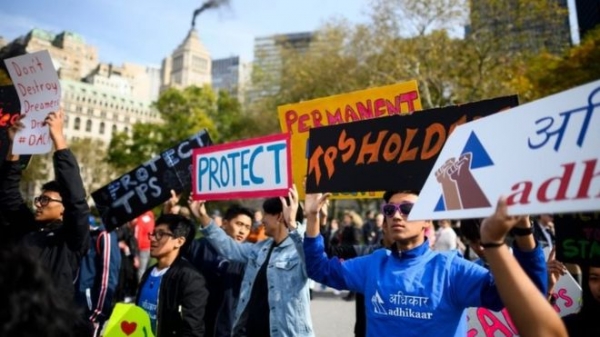 The Trump Administration has extended permits that allow an estimated 200,000 people from El Salvador to work and live in the US until January 2021.

Their status was due to expire in January 2020.

Salvadorean officials said the extension would give their fellow citizens in the US "breathing room".

There have been conflicting statements from US officials as to whether the agreement constitutes an extension to Salvadoreans' TPS or just an extension of their work permits.

What is TPS?
The programme was created in 1990 and authorises immigrants from several countries to live and work in the US lawfully, regardless of whether they entered the country legally or not.

It is only granted to countries affected by armed conflict, environmental disaster or epidemics. Ten countries, from which there are more than 300,000 immigrants in the US, have been granted TPS protections since it was first signed into law by President George HW Bush.

Democrats decry 'cruel' El Salvador migrants order
The story behind one of the world's most brutal street gangs
Trump 'in crude Oval Office outburst about migrants'
The Trump Administration has taken a hard stance on TPS, arguing that "temporary means temporary" and that TPS should not have been extended in cases where the original reason for granting it no longer applied.

This has created uncertainty and anguish among those living under TPS in the US, of which Salvadoreans are the largest group by far.

But the president's attempt to end TPS has been challenged in the courts and currently remains blocked.

What's the latest?
US Ambassador to El Salvador Ronald Johnson announced on Monday that "today in Washington, we signed an agreement which extends the TPS for the Salvadoreans for another year".

But the acting director of US Citizenship and Immigration Services, Ken Cuccinelli, later tweeted a clarification which appeared to contradict what the ambassador had said.

On its website, the US Department of Homeland Security said that the "Trump Administration is extending the validity of work permits for El Salvadorans with Temporary Protected Status (TPS) through January 4, 2021".

"Additionally, the Trump Administration is providing El Salvadorans with TPS an additional 365 days after the conclusion of the TPS-related lawsuits to repatriate back to their home country," the statement added.

El Salvador's Foreign Minister Alexandra Hill said that whether the agreement amounted to an extension to TPS or not was "a technicality". The ministry said in a statement seen by Voice of America news agency that it understood that Salvadoreans would now be allowed to stay in the US until January 2022.

The agreement also included plans to deploy US customs and border officials to the Central American country to train their Salvadorean counterparts. Furthermore, the two sides said they would increase the collection and sharing of biometric data.

What's the reaction been?
Salvadorean President Nayib Bukele was visibly delighted when he made the announcement side-by-side with the US ambassador in a video message [in Spanish] he published on his Twitter account.

In the message, President Bukele says that the extension "gives decision-makers additional time to find a permanent solution" for Salvadoreans living in the US.

Ambassador Johnson said the move was "in recognition of the achievements and good work of President Nayib Bukele".

Ken Cuccinelli said that the agreement was "a tremendous step forward to address security concerns of aliens entering the US at our Southern border".

But immigration activists in the US said they wanted more clarity about when the additional 365-day deadline mentioned by Mr Cuccinelli would start running.