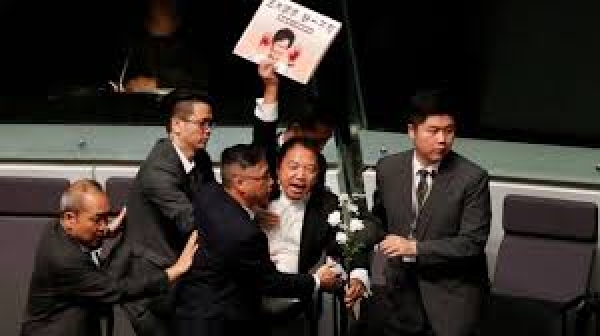 Hong Kong's leader Carrie Lam has been heckled by opposition lawmakers for a second day as she tried to answer questions in parliament.

After shouting and holding up placards, 11 opposition members were removed from the session by security guards.

On Wednesday, Ms Lam was forced to suspend her annual policy address after she was interrupted by opponents.

Hong Kong has seen months of mass protests against the government, sparked by a proposed extradition law.

The opposition forms a small minority in the Legislative Council (Legco) but managed to repeatedly interrupt Ms Lam, forcing the session to be adjourned several times.

Some of the ejected lawmakers were holding white flowers to express solidarity with people injured during months of demonstrations.

As they were dragged out, they shouted: "Carrie Lam you should not stay on as chief executive! You are not qualified."

Her critics in the session accused her of not addressing the political crisis in her policy speech the previous day.

On the protests which have engulfed the city for months, she reiterated that people should abstain from violence and solve disagreements within the spirit of the rule of law.

The chief executive also said the city was facing economic recession and that her government would offer subsidies to affected businesses.

What are the Hong Kong protests about?
Initially a protest against an extradition law - which would have meant Hong Kongers could have been sent to China to stand trial - the demonstrations have grown to include demands full democracy.

Hong Kong was once a British colony but was returned to Chinese rule in 1997 under a "one country two systems" principle. That means it has more freedoms and rights than the mainland.

Its leadership, however, is not directly democratically elected - and Carrie Lam is seen as part of the pro-Beijing political establishment.

Many in Hong Kong fear that Beijing's growing influence is gradually eroding the territory's freedoms.

In September, the government promised the extradition bill would be completely withdrawn once parliament resumed, but demonstrations continued.

Don't characterise the protests as "riots"
Amnesty for all arrested activists
An independent inquiry into alleged police brutality
Implementation of complete universal suffrage
Withdrawal of the extradition bill.
Clashes between police and activists have become increasingly violent, with police firing live bullets and protesters attacking officers and throwing petrol bombs.

On Wednesday evening, the leader of one of Hong Kong's largest pro-democracy groups was taken to hospital after being attacked.

Photographs on social media showed Jimmy Sham of the Civil Human Rights Front lying in the street, covered in blood.

More in this category: « Chinese diplomats must notify their moves in US Millions of masks distributed to students in 'gas chamber' Delhi »
Login to post comments
back to top