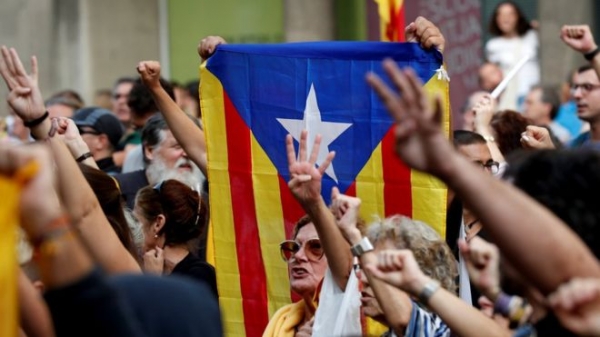 in prison for sedition over their role in an independence referendum in 2017.

Three other defendants were found guilty of disobedience and fined, but will not serve prison sentences.

The 12 politicians and activists had all denied the charges.

In response to the verdicts, Catalan independence supporters marched in Barcelona before blocking some streets.

Catalonia crisis in 300 words
Some of those sentenced had held prominent positions in Catalonia's government and parliament, while others were influential activists and cultural advocates.

During four months of hearings, they told the court in Madrid that they were victims of an injustice in a trial built on "false" charges.

What are the sentences?
The prosecution had sought up to 25 years in prison for Oriol Junqueras, the former vice-president of Catalonia and the highest-ranking pro-independence leader on trial.

Junqueras was handed the longest sentence of 13 years for sedition and misuse of public funds.

Others to receive prison sentences for sedition were:

The remaining three defendants were earlier released on bail.

Anger spills on to the streets of Barcelona
By Damian Grammaticas, Europe correspondent

The sentences handed down have shocked many across Catalonia. Shortly after they were announced small knots of students - banners and flags held aloft - began marching in Barcelona, heading for the squares where they gathered during the independence bid two years ago.

Anger swirled in the air along with sound of whistles and loudhailers. "This is not justice, this is revenge" they shouted. Police had cordoned off sections of the city's streets to traffic.

The prison terms given to the Catalan independence leaders were not the 25 years prosecutors had sought in some cases, but they are nevertheless seen as an outrage by many Catalans.

During their closing arguments in June, defence lawyers told the court their clients denied the charges of rebellion and sedition, but admitted to the lesser charge of disobedience, which could have seen them be banned from public office but avoid prison.

What other reaction has there been?
Junqueras accused Spain of jailing people for their political ideals and pledged that the separatists would return even stronger.

But Spain's Prime Minister Pedro Sanchez insisted the leaders had been jailed for criminal conduct.

Madrid has deployed police reinforcements in the region.

Carles Puigdemont, the former Catalan president who escaped trial after fleeing to Belgium before he could be arrested in 2017, said the sentences handed to separatist leaders of "100 years in total" were "an atrocity".

"Now more than ever... it is time to react like never before," he wrote on Twitter, adding: "For the future of our sons and daughters. For democracy. For Europe. For Catalonia."

The Catalan National Assembly called for "mobilisations around the globe" - including in the UK, France and Germany - in a tweet using the hashtag #StandUpForCatalonia.

Others used the hashtag to post footage of students marching in protest against the sentences moments after they were announced on Monday.