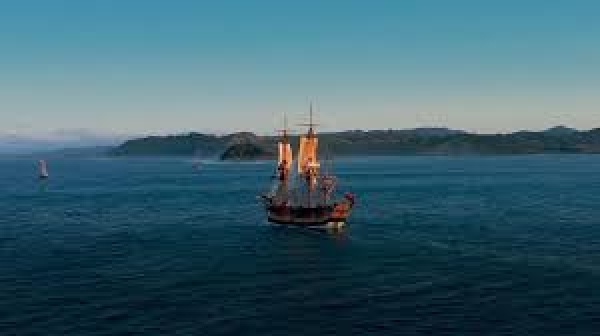 A flotilla has arrived in New Zealand commemorating the 250th anniversary of the first Europeans to set foot there.

British explorer Captain James Cook and the crew of the HMS Endeavour came to shore at Gisborne on 8 October 1769, ushering in colonial rule.

Events are taking place around the country to mark the milestone date.

But nine indigenous people died during the first meeting between Cook and the Maori, who had been living in New Zealand - or Aotearoa - for centuries.

Many say it is not an anniversary to celebrate, and protests were held on the shore as the Endeavour replica arrived on Tuesday.

Dame Jenny Shipley, co-chair for the 250th anniversary commemorations, said some people thought Cook's arrival made "a huge contribution to society" - while others thought it a "tragic intervention".

"It is not a bad thing if people want to express their differences and New Zealanders are ready to grow up and do that," she told Radio New Zealand.

Last week British High Commissioner Laura Clarke delivered a statement of regret to local tribes - known as iwi - over the nine deaths. But she stopped short of issuing an apology.

Maori people from Polynesian islands are believed to have arrived in New Zealand - or Aotearoa in Maori - hundreds of years prior to the first Europeans.

Crowds were up at sunrise to watch as the replica of Cook's Endeavour sailed through Poverty Bay, or Taranganui-a-kiwa.

"We are here to celebrate Captain James Cook and everything that he did and he represents our heritage of which we are very proud," said Val McGreevy, a Gisborne resident.

But here in Gisborne, the anniversary of Cook's landing has been a time for celebration, reflection and protest, and there was a hostile welcome from Maori groups.

They are angry that Cook's arrival has been commemorated in such a significant way.

"The fact that we have to re-live that traumatisation as a whanau hapu iwi [extended family groups and tribes] is actually quite devastating for us as Maori.

"Our indigenous rights have been breached over and over again," said Marise Lent, one of the demonstrators.

Who was Captain Cook?
Capt Cook had been sent on a mission from the UK to find what people at the time believed must be a large continent in the Pacific, south of Australia.

The crew - including a Tahitian chief and navigator called Tupaia who helped Cook communicate with the Maori - came ashore at Tuuranga-nui, now Gisborne, on the east coast of North Island two days later.

A leader of the Ngati Oneone group was immediately shot and killed after what is believed to be a misunderstanding over a ceremonial challenge. At least eight other Maori were killed.

Cook went on to sail and chart much of the coast of New Zealand, stopping at several places and establishing relations with Maori residents.

He also claimed possession of two areas in the name of the British crown, starting the process of colonisation.

Though James Cook's exploration of New Zealand dominates history books, Dutch navigator Abel Tasman was the first European to catch sight of it, in 1642, but he never made it to land.

What commemorations are planned?
New Zealand has planned several days of events to mark the milestone of the first meeting between Maori and Europeans.

In a speech she called for a more open conversation about New Zealand's history, encouraging people to "imagine what it would be like to hear a story be retold, knowing that, actually, you lost an ancestor directly because of those encounters".

Britain regrets Maori killings by Endeavour crew
The countries grappling with their European past
She said in the past, New Zealand was "only really telling, I believe, 50% of the story, and not always telling it well".

New Zealand should continue to learn and tell the full story of its past, she added.

Then on Tuesday morning, a flotilla of ships including a replica of the Endeavour reached Gisborne. Members of Parliament Kelvin Davis and Kiritapu Allan went aboard to greet the crew.

Why is the anniversary controversial?
Despite the UK's statement of regret, many Maori rights advocates say not enough has been done to acknowledge what happened in those first few days of Cook's arrival.

Protesters also say their Maori ancestors were treated unfairly during the colonial era and that today, Maori communities face disproportionate levels of poverty, crime and discrimination as a result.

In Gisborne, a statue of Cook has been repeatedly defaced with graffiti and is to be replaced.

More in this category: « Afghanistan Taliban commanders freed 'in swap for Indian hostages' Typhoon Hagibis: Homeless men denied shelter in middle of typhoon »
Login to post comments
back to top