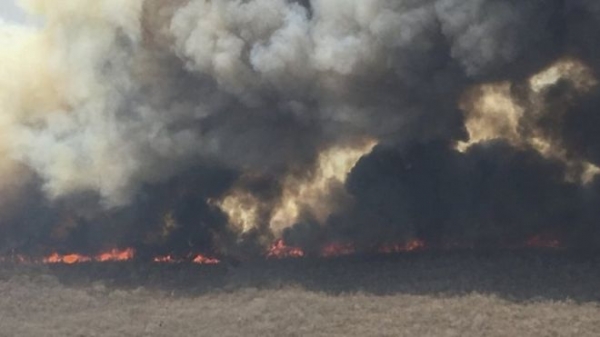 "It has rained all across Chiquitanía and our satellite no longer shows any active forest fires," a Santa Cruz province official said.

The fires triggered mass protests against the environmental policies of President Evo Morales.

Hundreds of thousands demonstrated against the president on Friday.

The environment minister of Santa Cruz province, Cinthia Asín, said that firefighters would continue to monitor the area for another 24 hours to make sure none of the blazes would reignite.

It is not yet clear if the fires in other areas of Bolivia have also been put out by the rains.

'Macabre game'
The fires first started in May and worsened in August with NGO Friends of Nature Foundation (FAN) estimating that more than four million hectares of land have been destroyed across Bolivia.

Nearly 2.9 million hectares of grassland and forest were burned in the Chiquitanía area alone with almost half of that land in protected areas, including in the Otuquis national park, according to Ms Asín.

In pictures: Indigenous Bolivians demand action over fires
How bad are forest fires this year?
Santa Cruz is the region hit hardest the fires and its residents have been urging President Morales to declare a national emergency in the hope that more international aid would reach the area.

The government blamed dry weather and high winds for the rapidly spreading fires but many locals say the fires were deliberately laid by farmers to clear land for pasture or planting.

Critics of President Morales say a decree he passed allowing farmers to clear more land for agricultural production has encouraged the uncontrolled burning of land.

Under the decree, the land farmers are allowed to clear has quadrupled from five to 20 hectares.

Defence Minister Javier Zabaleta said that firefighting efforts had also been hampered by "saboteurs" who reignited fires as soon as they had been put out.

"This is a macabre game. We put out the fires and there are people behind us that are starting them again," he said.

Anger continues
On Friday, hundreds of thousands of people took to the streets in Santa Cruz to express their anger at President Morales's response to the fires.

They called on voters to punish Mr Morales by voting against him in the upcoming presidential election on 20 October.

Santa Cruz, a wealthy industrial city, is an opposition stronghold and many of those protesting also carried banners calling on Mr Morales to respect the outcome of a 2016 referendum on presidential term limits.

The 2016 referendum, in which a majority of Bolivians voted "no" to Mr Morales's suggestion to ditch the presidential term limits, remains a divisive issue in Bolivia.

Those opposed to Mr Morales say he has ignored the will of the people by taking the matter to Bolivia's constitutional court, which ruled in his favour, allowing him to stand for a fourth consecutive term.

More in this category: « Bolivia wildfires in east extinguished by rain Ecuador protests: President moves government out of Quito »
Login to post comments
back to top