German lorry attack in Limburg seen as 'act of terrorism' 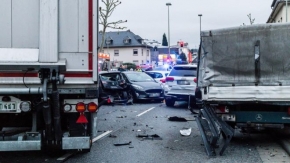 An attack on motorists in the western town of Limburg is being investigated as terrorism, security sources have told German media.

On Monday, a man hijacked a lorry and ploughed into eight vehicles waiting at a traffic light, injuring eight people. Seven were treated in hospital.

A thirty-two year-old suspect has been arrested.

Originally from Syria, the man has been living in Germany since 2015, local reports say.

Police searched a flat in Langen, south of Frankfurt, early on Tuesday and said it was linked to what had happened in Limburg, local reports said.

Prosecutors are also investigating whether the attacker had any mental health concerns.

The suspect was due to appear before a judge on Tuesday, reports the Frankfurter Neue Presse (FNP) newspaper.

The owner of the stolen lorry told FNP that he had been dragged from his vehicle by the man, who had forced the door open.

"What do you want from me?" the driver said he asked the man. "He didn't say a word. I asked him a again and then he dragged me out of the lorry."

Another witness, Bettina Yeisley, described talking to the hijacker afterwards without realising he had driven the lorry.

"I spoke to him. He was bleeding from his nose, his hands were bloody and his trousers torn. He said 'my whole body hurts.' I asked his name and he told me his name was Mohammed," she told the newspaper. Other German reports gave his name as Omar.

Marius Hahn, the mayor of Limburg, said his thoughts were with the injured and their families.

Germany attacks: What is going on?
Germany has been on high alert following several jihadist attacks in recent years.

The most deadly was in December 2016 when a man drove a lorry into a crowded Christmas market in Berlin, killing 12 people.

Anis Amri, the Tunisian behind the attack, was shot and killed in Italy four days later.