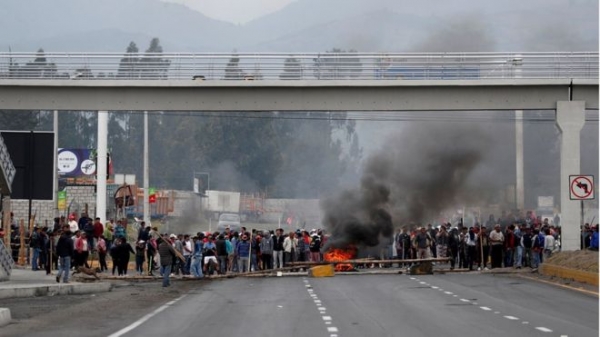 Indigenous groups in Ecuador have taken the lead in protests against the end of fuel subsidies, blocking roads and highways in the country.

About 50 police officers have been taken hostage in various locations.

President Lenin Moreno says he will not bring back subsidies and has declared a two-month national emergency.

The protests were originally led by transport unions who have since stopped their action. Other sectors are calling for a national strike on Wednesday.

Ecuadorians say abolishing fuel subsidies has also led to rising prices for consumer goods. About 20 people have been arrested for raising food prices, the government said.

Data on almost every Ecuadorean citizen leaked
Ecuador's parliament rejects easing law in rape cases
Ecuador 'allows US military to use Galapagos island airfield'
They had been overcharging for products such as corn, onions, carrots and potatoes, which are subject to price controls, the authorities said.

"There is no justification for raising the prices," Interior Minister Maria Romo said.

One man died in the Andean province of Azuay in the south of the country, the government said. Reports said roadblocks in the area had stopped an ambulance from reaching him after he was hit by a car.

How significant is the indigenous groups' action?
Some of the road blockages have affected petrol deliveries, leading to fuel shortages in parts of the country.

They have affected routes including the main north-south highway in the country.

In some places, protesters threw stones and rocks, clashing with security forces who fired tear gas.

An umbrella group for indigenous groups in the country, the Confederation of Indigenous Nations in Ecuador (Conaie) said it was declaring a "state of exception" in indigenous areas, where soldiers and police officers would be detained and would face "indigenous justice".

Luis Iguamba, leader of the Kayambi people from northern Ecuador, said they would keep up the pressure on the government.

"We are fighting for everyone and we are fighting to foresee the rights we all have and we can't allow this. So, everyone, be on the lookout and keep up the fight. Let's radicalise the strike," he said.

Schools are to remain closed in Andean areas of the country because of the protests, EFE news agency quoted the education minister as saying.

Their intervention follows protests on Thursday and Friday that saw roads in the capital Quito and the city of Guayaquil strewn with makeshift barricades and burning tyres.

Why did the president scrap the subsidies?
Mr Moreno said the fuel subsidies, which cost the government $1.3bn (£1bn) annually, were no longer affordable.

The elimination of the fuel subsidies, introduced in the 1970s, are part of Mr Moreno's plan to shore up Ecuador's flagging economy and ease its debt burden.

Ecuador's government has agreed to cut public spending as part of a loan deal with the International Monetary Fund (IMF).

On Tuesday, Ecuador announced it was leaving the Organization of the Petroleum Exporting Countries (Opec) to pump more oil and raise revenues.

More in this category: « El Chapo 'gave $1m to Honduran president's brother' Bolivia wildfires in east extinguished by rain »
Login to post comments
back to top