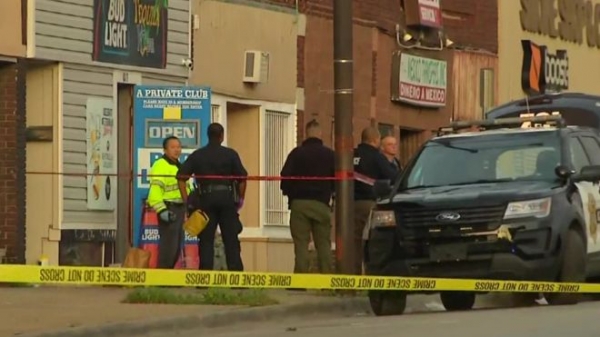 Four people have been killed in a shooting at a bar in Kansas City in the US Midwestern state of Kansas.

Five other people were wounded during the incident at a members-only bar in the city centre, local police say.

They believe that "an earlier dispute occurred inside the bar", which led to the shooting just before 01:30 local time (06:30 GMT).

Earlier, the local police told the BBC that a suspect was a Hispanic man.

An investigation is continuing.

America's gun culture in charts
US gun laws: Why it won't follow New Zealand's lead
So far this year, the US has been hit by more than 40 mass shootings - defined since 2012 as incidents that kill at least three people.

What is known about the shooting?
The KCKPD said in its statement that police officers were despatched "to the 1000 block of Central Avenue (Tequila KC)" after receiving first reports of a shooting.

"Upon arrival, we located a total of nine people that had been shot. Four of the victims were found deceased inside of the business and five were found outside with injuries, all due to gunshots," the KCKPD said.

About 40 people were inside the bar at the time of the shooting, according to a police estimate.

More than one gunman may have been involved, and it is possible the perpetrator was at the bar earlier and had returned to carry out the attack, police spokesman Thomas Tomasic said.

A handgun was used during the incident, he added, and police believe it is unlikely another attack will be carried out by the attacker or attackers.

The identities of those killed have not yet been released, but the Mexican government said that two of the victims were Mexican citizens. Two are in their mid-20s, one is in their mid-30s and the fourth in their late 50s.

Some of the injured have been released from hospital and the others are in a stable condition, police say.

The Kansas City metropolitan area straddles the border between the states of Kansas and Missouri, with the main municipality being Kansas City, Missouri. The shooting occurred in the smaller Kansas City on the Kansas side.