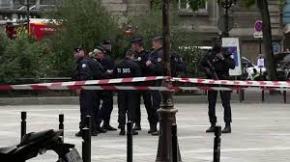 Signs of Islamist radicalisation ought to trigger an "automatic alert", the French interior minister has said, deploring "failings" which allowed a knifeman to kill four of his police colleagues last week.

Mickaël Harpon was shot dead on Thursday after stabbing colleagues at the Paris police headquarters.

But nobody raised any formal concerns.

"In his file there was no trace of any radicalisation, no sign. There was a failing," Mr Castaner told French news broadcaster France Inter.

He said investigators only learnt on Friday that in 2015 some of Harpon's colleagues had spoken about his praise for the jihadist attack on the offices of satirical magazine Charlie Hebdo. Two gunmen killed 12 people there - an attack that Harpon reportedly described as "well executed".

Charlie Hebdo lives on but 'in darkness'
Why known extremists can carry out terror attacks
Police colleagues had also commented on Harpon's changed behaviour towards women but, according to Paris police intelligence chief Françoise Bilancini, no concerns were formally reported.

"The alarm signals should have been enough to trigger an in-depth investigation, which is what we are doing now," Mr Castaner said. "If a signal had appeared perhaps we could have prevented this happening."

About 20 officers in the French security services have been taken off duty because of suspected Islamist radicalisation, he said, without giving details.

Mr Castaner brushed off calls for his resignation over the police "failings", saying he had not made any error in this case. But he pledged that "we will tighten the net" to pick up suspicious signs and rectify the "malfunctioning" alert system.

Islamist background
Harpon, a 45-year-old IT expert, had been working in the police intelligence unit since 2003. He had contact with members of the Salafist movement, anti-terrorist prosecutor Jean-Francois Ricard said, referring to the ultra-conservative Islamic ideology.

On Thursday morning, shortly before his attack, he exchanged 33 text messages with his wife. Mr Ricard said Harpon included religious phrases in his messages, such as "Allahu akbar" (God is greatest) and "follow our much-loved Prophet Muhammad, and meditate on the Koran".

His Moroccan-born wife was questioned by police but released from detention on Sunday evening. She reportedly told police that he had been incoherent and had heard voices the night before the attack.

Anti-terror investigators took over the inquiry on Friday. It was initially regarded as a criminal matter.

Harpon was shot dead on Thursday by a junior police officer after he attacked colleagues in several offices at the central police building.

According to Mr Ricard, investigators established that Harpon left the building at lunchtime and bought two knives - one metal, the other ceramic - just half an hour before launching his attack.

He stabbed three people inside two offices and two women on a stairway, before he was shot dead inside the building's courtyard. Three men and one woman were killed. A fifth person was seriously injured. Harpon slit the throat of one of the victims.

The police building is near major tourist sites including Notre-Dame Cathedral.