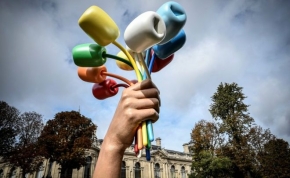 A large tulip sculpture in Paris in tribute to the victims of the 2015 attacks in the city has been criticised for looking more like marshmallows - or even unsightly parts of human anatomy.

The Bouquet of Tulips, a gift from US artist Jeff Koons unveiled near the Champs-Elysées on Friday, features the flower often used to symbolise love.

But the work, created in Koons' typical kitsch style, has divided opinion.

In November 2015, mass shootings and a bomb attack killed 130 people in Paris.

The co-ordinated terror attacks on a concert hall, a major stadium, restaurants and bars in the French capital wounded hundreds more.

Unveiling his 40ft (12m) high structure near Le Petit Palais art gallery on Friday, Koons said the large handheld bouquet of balloon-like tulips was intended to show his support and US solidarity with the French people.

"I did, as a citizen in New York, experience 9/11 and the depression that hung over the city," he said, adding that 80% of the money raised after selling the copyright to the artwork would be given to the victims' families.

Huge biodegradable artwork graces Paris park
Sculptures face 'too friendly' for Satan
'Nightmare' hand statue looms over city
But since Bouquet of Tulips was made public, Parisians and critics have been sharing their thoughts, with some referring to the piece as "awful", "grotesque" and "pornographic".

Another, Rosa, tweeted that Parisians would "now think that tulips are large coloured marshmallows".

Columnist Eric Naulleau, who earlier criticised Koons for "imposing his poor bouquet of tulips" on Paris, said on Monday that the artwork was "dreadful".

Some even suggested they would avoid that particular area of the park when passing through.

Others, though, said they did not understand the controversy, describing the work as "pretty" and "a gift from the heart".

Patricia Correia, whose daughter was killed in the attack at the Bataclan concert hall, told the Associated Press that it was "a very strong testament" to France's relationship with the US, adding "for me it represents the colours of life".

Paris Mayor Anne Hidalgo said on Friday she was very happy to unveil the work, calling it a "beautiful gift" and "a magnificent symbol of freedom and friendship".

The donation of Koons' Bouquet of Tulips was first announced in November 2016. The original plan was to erect it near the Palais de Tokyo, a contemporary art museum, but that was later criticised for lacking a connection with the attacks.

In January 2018, a letter drafted by artists urged government officials to abandon the "shocking" project, but they later selected the site at Le Petit Palais.

Who is Jeff Koons?
The 64-year-old US artist's sculptures have provoked controversy for decades after he emerged as a leading figure in New York's art scene in the 1980s.

Koons' artworks are often large colourful balloon-like structures, such as puppies and swans, and made from steel.

He has also displayed large inflatable pieces around New York.