Trump makes way for Turkey operation against Kurds in Syria 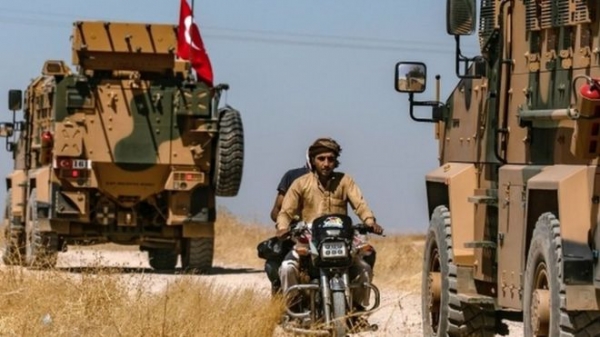 The US says it is stepping aside for an imminent Turkish operation against Kurdish-led forces within Syria that have until now been a key US ally.

Kurdish militias played a major role in defeating the Islamic State (IS) group, but Turkey regards them as terrorists.

The US - which has hundreds of troops in north-eastern Syria - has begun to withdraw them from a border area where Turkey seeks to set up a "safe zone".

Syria's main Kurdish-led group called the US move a "stab in the back".

Turkey 'ready to set up Syria safe zone'
Why the battle for northern Syria matters
However, a White House statement issued on Sunday makes no reference to the Kurdish fighters.

What did the White House say?
"Turkey will soon be moving forward with its long-planned operation into northern Syria," the statement said.

"The United States Armed Forces will not support or be involved in the operation, and United States forces, having defeated the Isis territorial 'Caliphate', will no longer be in the immediate area."

The White House also said that Turkey would take over all responsibility for IS fighters captured by Kurdish forces over the past two years.

More than 12,000 men are held on suspicion of being IS members in Kurdish-controlled camps located south of the Turkey's planned "safe zone". At least 4,000 of them are foreign nationals.

This represents a significant shift in US policy - President Trump acting against the advice of many in the Pentagon and state department.

It risks a recasting of alliances in Syria. The Kurds may be forced to seek an accommodation with the Syrian government. The potential chaos could facilitate a resurgence of IS. Indeed, the US pullback of its forces from the border area may herald the full withdrawal of troops from Syria that Mr Trump has long wanted.

It marks a betrayal of Washington's Kurdish allies, a betrayal that many other countries in the region will note with alarm.

Both the Saudis and the Israelis are coming to realise that Mr Trump's robust rhetoric is rarely matched by actions.

Last month the Syria Study Group, a bipartisan body commissioned by Congress, stated in its final report that the US still has significant security interests in Syria and retains some policy levers with which to influence events there. But that is clearly not Present Trump's view.

How have the Kurds reacted?
On Monday a spokesman for the Kurdish-led Syrian Democratic Forces (SDF) - who occupy former IS territory in north-eastern Syria - strongly condemned the US move.

"There were assurances from the United States of America that it would not allow any Turkish military operations against the region," Kino Gabriel told Arabic TV station al-Hadath.

He added: "The (US) statement was a surprise and we can say that it is a stab in the back for the SDF."

Kurdish TV in northern Iraq said the SDF had put some of its units on alert because the Turkish army had mobilised troops on the border on Monday.

What is Turkey planning?
Late on Sunday, Mr Erdogan's office said that he and President Trump had spoken on the phone about Turkey's plan to set up a "safe zone" in north-eastern Syria.

It said the 20-mile (32km) zone along the border was needed to combat "terrorists" and create "the conditions necessary for the return of Syrian refugees".

Turkey considers the Kurdish YPG militia - the dominant force in the SDF alliance - an extension of the banned Kurdistan Workers' Party (PKK), which has fought for Kurdish autonomy in Turkey for three decades.

Turkey hosts more than 3.6 million Syrians who fled the civil war that began in 2011. It wants to move up to two million of them into the zone.

In his call with Mr Trump, President Erdogan also expressed his "frustration over the US military and security bureaucracy's failure" to implement an agreement reached in August about the zone, his office said.

On Saturday, he warned that Turkish forces could launch a cross-border offensive in the coming days, but gave no details.

How large will the Turkish operation be?
Analysis by Quentin Sommerville, Middle East correspondent

Invasion or incursion? That's the uppermost question about Turkish action in north-eastern Syria. Initial indications would point to a limited incursion by Turkey along a 60-mile (100km) stretch between the towns of Tal Abyad and Ras al-Ain.

Similarly, the big Kurdish towns and cities along the border - Kobane, Qamishili and others - remain calm. There's been no call for people to evacuate.

Prisons full of IS foreign fighters are further south and will remain under Kurdish control - if Turkey restricts itself to a limited assault.

However, it may not stop there: regime sources are calling it "a full incremental invasion". So British and American special forces have for months been making preparations for a partial or full withdrawal from the area if the situation escalates.