Trudeau defends the number of planes used by his campaign 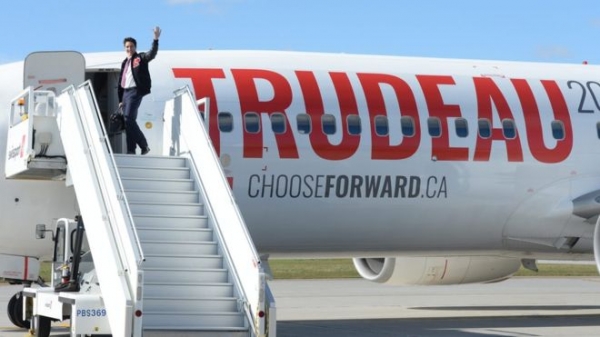 Liberal leader Justin Trudeau is facing criticism over his campaign's use of two planes.

None of the other parties in this election is using more than one plane as their leaders campaign across Canada's vast territory.

The Conservatives accused Mr Trudeau of being "hypocritical" on environmental issues for using two planes - already a carbon-intensive mode of transport.

The Liberals say they bought carbon offsets for their tour emissions.

The Conservatives confirmed that they are not offsetting the emissions produced by the leader's tour and its single plane.

Other major parties - the NDP, the Liberals, the Bloc Québécois, the Greens - all say they are or will use carbon offsets.

On Thursday, Mr Trudeau accused the Conservatives of trying to deflect from their own record on climate issues.

"What we're seeing here from the Conservatives is a classic and desperate attempt to distract that they have zero respect for the environment," he told journalists in Montreal.

The reveal of the two Liberal planes was part of a fiery exchange during the first French-language election debate on Wednesday night.

Mr Scheer accused the Liberal leader of being a "fake environmentalist".

Canada leaders clash in first French debate
'Cut your turban off,' Canadian party leader told
Is Trudeau doing enough on climate change?
The Conservatives then released the details of the two Liberal campaign planes to the media.

There is an official branded Boeing campaign plane for Mr Trudeau, his staff, and journalists, and a second Boeing aircraft the party uses to ferry cargo.

What is carbon offsetting?
Carbon offsetting allows people to pay extra to help compensate for the carbon emissions produced from their flights or other emission producing activities.

The money is then invested in environmental projects - such as planting trees or installing solar panels - aimed at reducing the greenhouse gases in the air by the same amount.

'Flight shame' could halve growth in air traffic
Some activists have criticised carbon offsetting as an excuse to continue polluting, arguing that it does little to change behaviour.

Mr Trudeau's Liberals say they have partnered with Less Emissions, which provides carbon offsets for flight related emissions, for the campaign.

The NDP, which has one plane, said it is trying to limit the campaign's carbon footprint, and are planning to offset emissions.

The Bloc Québécois campaigns exclusively in one province and so travels by bus. The party is partnering with a Quebec-based carbon offset programme.

The Green Party says it does purchase carbon offsets and tries to limit campaign travel. Leader Elizabeth May crosses the country by train "as much as possible" and flies commercial only as needed, a spokeswoman said.

What have the two parties promised on climate?
Climate change has become a central issue in this federal election campaign, and in opinion surveys it frequently comes up a core issue for many voters who will be going to the polls on 21 October.

The Liberals have promised that they will exceed Canada's 2030 emissions goals - despite not currently being on track to meet the pledge to reduce greenhouse gas emissions by 30% below 2005 levels by that year.

They have also committed to reaching net-zero emissions by 2050 - which would mean any emissions would be entirely offset by other actions - if re-elected.

The Conservatives have said they would immediately repeal the price on carbon Mr Trudeau's Liberal government imposed on four provinces, and instead focus on funding and exporting green technology innovation.