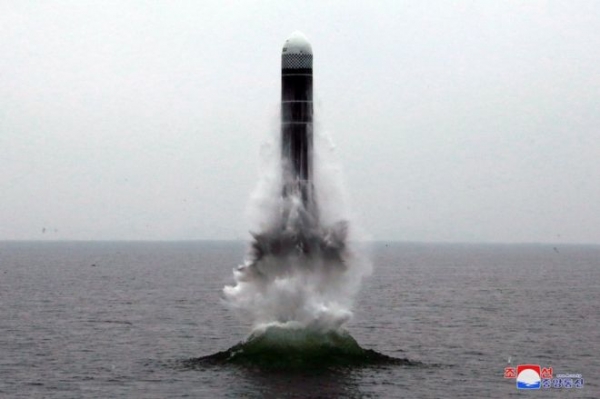 North Korea has confirmed it test-fired a new type of a ballistic missile, a significant escalation from the short-range tests it has conducted since May.

The missile - which was able to carry a nuclear weapon - was the North's 11th test this year.

But this one, fired from a platform at sea, was capable of being launched from a submarine.

Being submarine-capable is important as it means North Korea could launch missiles far outside its territory.

According to South Korean officials, the missile flew about 450km (280 miles) and reached an altitude of 910km before landing in the sea.

That means the missile flew twice as high as the International Space Station, but previous North Korean tests have gone higher.

It came down in the Sea of Japan, also known in South Korea as the East Sea. Japan said it landed in its exclusive economic zone - a band of 200km around Japanese territory.

The test came hours after North Korea said nuclear talks with the US would resume.

What do we know about this missile?
The missile was launched from the sea soon after 07:00 on Wednesday (22:00 GMT Tuesday), about 17km north-east of the coastal city of Wonsan.

It added there was "no adverse impact on the security of neighbouring countries".

Unlike previous tests, there were no pictures of North Korean leader Kim Jong-un at the launch.

In the previous 10 missile tests carried out this year, only short-range projectiles were fired.

Why is 'submarine-capable' significant?
If the missile was launched on a standard trajectory, instead of a vertical one, it could have travelled around 1,900 km (1,200 miles). That would have put all of South Korea and Japan within range.

But being launched from a submarine can make missiles harder to detect, and allows them to get closer to other targets.

North Korea's existing Romeo-class submarines, which were built in the 1990s, are believed to have a range of about 7,000 km, the Reuters news agency said.

This would make a one-way trip to near Hawaii possible.

The north's submarines are, however, diesel-powered - which makes them noisier and easier to detect.

North Korea's introduction of the Pukguksong-3 submarine-launched ballistic missile is a grave moment for North East Asian regional security - and a reminder of what has been lost over nearly two years of all-show-no-substance diplomacy.

This missile is destined for a submarine, but it wasn't launched from one. North Korea's engineers may have deemed it too risky to stake their one operational ballistic missile submarine in a test. Nevertheless, the missile appears to have successfully completed its flight with flying colours.

The Pukguksong-3, if it had been flown at a more normal angle, could have reached all of Japan's four main islands and all of South Korea from the centre of the Sea of Japan.

Most seriously, it represents the largest-ever solid-fuel system seen in North Korea. Solid-fuel missiles have many advantages over their liquid-fuel counterparts. They offer greater responsiveness and flexibility; unlike their liquid counterparts, they do not require extensive fuelling and preparation before use.

This test underscores why the United States must make extensive efforts to freeze North Korea's qualitative progress on missile technologies.

Ankit Panda is adjunct senior fellow at the Federation of American Scientists and author of forthcoming book Kim Jong Un and the Bomb.

How will this affect US talks?
Before the missile test, North Korea and the US confirmed that preliminary nuclear talks would take place "within the next week".

The US state department responded to the test by calling on Pyongyang to "refrain from provocations" and "remain engaged in substantive and sustained negotiations" aimed at bringing denuclearisation.

Negotiations between the US and North Korea have stalled since the Hanoi summit between President Donald Trump and Mr Kim in February ended without an agreement.

North Korea crisis in 300 words
North Korea's missile and nuclear programme
Are Pyongyang's missiles a risk to planes?
Experts said the proximity of the test and the talks announcement was deliberate.

"North Korea wants to make its negotiating position quite clear before talks even begin," Harry Kazianis of the Center for the National Interest in Washington DC told the AFP news agency.

"Pyongyang seems set to push Washington to back off from past demands of full denuclearisation, for what are only promises of sanctions relief."

North Korea is banned from using ballistic missiles by UN Security Council resolutions, and is under US and UN sanctions for its nuclear programme.

Reports suggest that, in the upcoming talks, the US may offer a suspension of UN sanctions on North Korean textile and coal exports for 36 months. In return, it wants the closure of the Yongbyon nuclear facility, and the end of uranium enrichment.

This is "less than the all-or-nothing approach Washington has taken so far", Vox reports.