Stranded whales: Numbers on the rise around UK shores 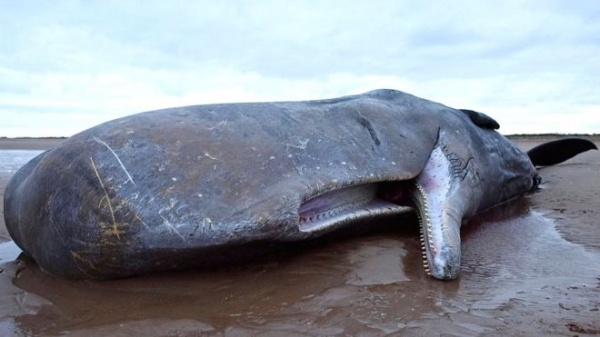 The number of whales and dolphins washed up around the UK coastline has risen, according to new figures.

Scientists found a number of causes for the deaths, including infectious diseases, fishing and plastic.

Rob Deaville of ZSL (Zoological Society of London), who led the report, said: "It's difficult to say conclusively what's driven this rise, but it's potentially associated with multiple causes, including increases in local reporting effort and seasonal variation in the population density of some species."

Although in some respects the data paints a bleak picture, there are still positives to be drawn, he added.

More than 20 cetacean (whale, dolphin and porpoise) species were recorded over seven years - roughly a quarter of all cetacean species known in the world.

One, the dwarf sperm whale, had never before been seen in the UK.

Record year for Irish whale strandings
Dozens of dead whales found beached in Iceland
Rare sighting of humpback whale off coast of Cornwall - BBC News
Since 1990, scientists have been co-ordinating the investigation of all whales, dolphins and porpoises that wash up around the UK coastline, giving an insight into wildlife and the health of the seas.

Post mortems were carried out on about 1,000 specimens, allowing the cause of death to be determined.

Accidental entanglement in fishing gear accounted for about one in four deaths of common dolphins, and one in 10 for the harbour porpoise.

Other deaths caused directly by humans included 25 animals struck by a ship and a single Cuvier's beaked whale which died in 2015 after swallowing marine litter.