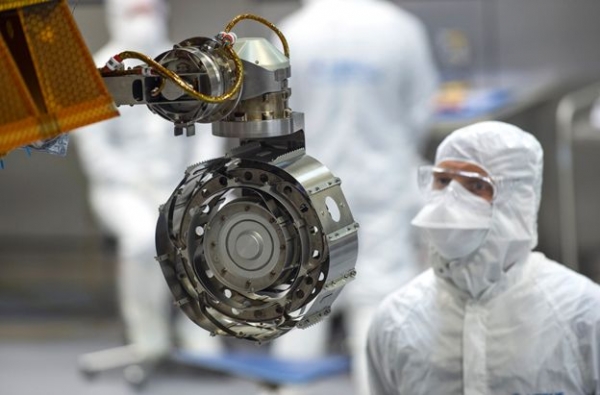 Assembly of the rover Europe and Russia plan to send to the Red Planet next year is complete.

Engineers at Airbus in Stevenage, UK, displayed the finished vehicle on Tuesday ahead of its shipment to France for testing.

Called "Rosalind Franklin" after the British DNA pioneer, the six-wheeled robot will search for life on Mars.

It has a drill to burrow 2m below ground to try to detect the presence of microbes, either living or fossilised.

The project is a joint endeavour of the European and Russian space agencies (Esa and Roscosmos), with input from the Canadians and the US.

Although the rover's build took just nine months, development work at component and instrument level has consumed more than a decade (the initial feasibility study was started in 2004).

Lift-off atop a Proton rocket is scheduled for July 2020. It is an eight-month cruise to Mars, with the landing on an ancient equatorial plain targeted for 19 March, 2021, around 0600 local Mars time.

China and the US are preparing their own rovers for launch in the same departure window as Rosalind Franklin.

China's vehicle, dubbed XH-1, is a slightly smaller concept. The Americans are assembling a near-copy of the one-tonne Curiosity robot that has been investigating the Red Planet for the past seven years. Their machine is codenamed currently simply Mars 2020.

What still needs to be done?
The roughly 300kg Rosalind Franklin rover is being bagged and boxed, ready to be sent to an Airbus facility in Toulouse this week. It's in southwest France that a series of checks will ensure the robot can withstand the rigours of interplanetary travel and operation.

There are actually three outstanding items yet to be integrated on the rover.

These are the radioisotope heaters that will keep the vehicle warm in the bitter conditions on Mars. But they are a Russian expertise and will not be inserted until just prior to blast-off.

In parallel with the work on the rover, engineers in Italy at the Thales Alenia Space (TAS) company are preparing the mechanisms required to get the rover safely to, and on to, Mars.

In Turin on Wednesday, the German cruise spacecraft that will shepherd the robot to the Red Planet, and the Russian descent module, which will protect it as it enters Mars' atmosphere, will have their first fit-check.

Eventually, all elements of the mission will meet in Cannes, at another TAS factory, for end-to-end mating and balancing.

"When the spacecraft is sent to Mars, it will be spinning. Like the wheels on your car, we have to check the balance to make sure everything spins smoothly," explained Van Odedra, Airbus rover project manager.

The entire system should be despatched to the Baikonur launch site in April to begin the process of preparing for the Proton lift-off.

"We still have big challenges ahead but mission success is our number one priority."

What's the critical next hurdle?
Currently, there is concern over the readiness of the parachute system that will slow Rosalind Franklin's descent through Mars' atmosphere to the surface.

Engineers have designed a two-chute system: a smaller supersonic envelope that opens first and a big subsonic membrane that opens once the entry speed has become manageable.

Two tests earlier this year - on both chute types - led to tearing on deployment.

Pietro Baglioni, Esa's ExoMars manager, said the problem appeared to stem from the way the parachutes were packed and then extracted - not from the nature of the material used to fabricate them.

Esa has called in Nasa to help with finding a solution because the American agency saw something similar during the development of the parachute system used on the successful Spirit and Opportunity rovers in 2004.

Further tests are planned for November and February.

The November demonstration will see engineers travel to Oregon for the launch of a stratospheric balloon.

This will drop a dummy mass from 30km in altitude; a mortar will fire the supersonic chute out of its container to simulate a Mars descent.

Mr Baglioni said the November test had "to show that the implemented corrective measures are at least on the right track. Going for a redesign of the entire parachute system is out of the question for a 2020 launch."

A formal "go/no-go" decision on the mission is expected early next year.

Why is Rosalind Franklin important for the UK?
Tuesday's send-off in front of the media was a big moment for the UK, which has made the Mars robot a central feature of its space science policy this past decade.

Britain has invested in the order of €290m (£260m) in the wider Esa-Roscosmos programme, codenamed ExoMars, that also includes a satellite positioned in orbit around the Red Planet. This satellite will act as the relay to send the rover's data home and, in the other direction, to feed Rosalind Franklin new commands.

A further £14m (€16m) of UK public money was also set aside specifically for instrument contributions on both the rover and the satellite.

UK scientists lead the PanCam (the panoramic camera system on the rover), for example, which will take the pictures that help the robot navigate Mars' terrain and identify the rocks of greatest interest.

With Rosalind Franklin now about to depart the country, there's intense interest in a follow-up.

Study work at Airbus-Stevenage is already considering the design of a rover that would pick up rock samples cached by Mars 2020 during its mission.

The aim would be to bring these samples back to Earth for a deeper analysis than is possible on Mars with remote laboratory tools.

The UK will tell its Esa partners when they gather in Spain in November for a major ministerial meeting that it will invest a substantial sum to secure the lead in building the "fetch rover", as it has become known.