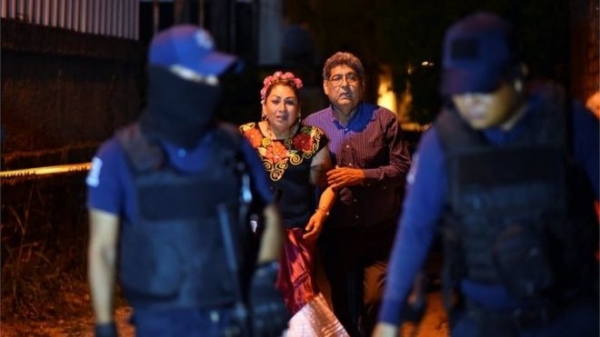 The first three months of 2019 have seen a 9.6% increase in murders in Mexico, official figures suggest. The report says 8,493 people were murdered from 1

The figures contradict statements by Mexican President Andrés Manuel López Obrador, who had said the murder rate had not risen since he took office.

Mr López Obrador was sworn in on 1 December. He had campaigned on a promise to drive down violence

The figures from the National System for Public Security are particularly worrying as 2018 had the highest murder rate since Mexico began keeping records of homicides.

The state with the highest murder rate so far in 2019 was Guanajuato, in central Mexico, where two powerful drug cartels - Jalisco New Generation and Santa Rosa de Lima - are fighting for control.

The numbers provided by the National System for Public Security were published just over a week after President López Obrador clashed with journalist Jorge Ramos at a press briefing over whether there had been a improvement in security in Mexico.

"Our data shows that we've brought the situation under control," the president said.

"The data I have shows something else, you're not controlling, to the contrary, many Mexicans continue to die," Mr Ramos challenged the president.

"They have not risen," President López Obrador said before adding: "I'm not saying we've solved the problem."

Mr López Obrador said he had inherited a violent country from his predecessors. Successive Mexican presidents have tried to drive down the country's high murder rates for years, even declaring a "war on drugs" in an attempt to defeat Mexico's powerful drug cartels.

But the number of murder victims has risen as the cartels splintered and fought for control of disputed areas.

During the presidency of Enrique Peña Nieto, who preceded Mr López Obrador in office, a number of high-profile cartel bosses were arrested, such as Joaquín "El Chapo" Guzmán, but the vacuum they left seemed to further inflame turf wars.

The downfall of one of the world's most notorious criminals
President López Obrador said he would create a new security force, the national guard, to rein in the violence, a move which has since been approved by both houses of congress.

The president aims to have a 80,000-strong force by the end of the year but some critics have questioned whether there are enough people willing to join the national guard.