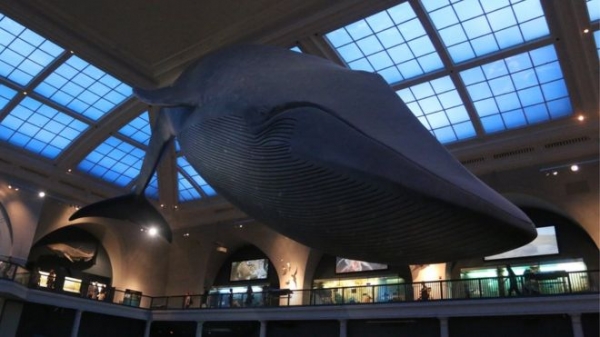 The American Museum of Natural History (AMNH) has said it will not now host an event at which Brazil's leader Jair Bolsonaro was due to be honoured. The museum drew heavy criticism

for agreeing to host a ceremony at which Mr Bolsonaro, who has advocated relaxing environmental policies, was scheduled to receive a person of the year award.

Museum officials said the event would now be held at a different location.

They said that the museum in New York was "not the optimal location".

How did this row erupt?
The Brazilian-American Chamber of Commerce, a non-profit non-governmental organisation that promotes trade, investment and cultural ties between the two countries, hired the museum's Hall of Ocean Life for its annual gala to be held on 14 May.

Is the honeymoon period over for Brazil's Bolsonaro?
A tale of two Trumps: Jair Bolsonaro goes to Washington
At the annual event, the chamber gives out its person of the year awards. This year one of those prizes is going to Mr Bolsonaro, who was sworn in as Brazil's president on 1 January.

On its website, the organisation said it had chosen the far-right leader in recognition of "his strongly stated intention of fostering closer commercial and diplomatic ties between Brazil and the United States and his firm commitment to building a strong and durable partnership between the two nations".

What were the objections?
Climate activists and environmental organisations such as Greenpeace have denounced Mr Bolsonaro as "a threat to Brazil's ecosystem".

Most of those opposed to having the museum host the event pointed to the president's plans to open up parts of the Amazon rainforest for development, which they argued was not in keeping with the museum's mission.

In a radio interview on 8 April, President Bolsonaro said he wanted the US to join in a development plan for the Amazon region. He also said that demarcations of indigenous reserves hampered development of the region and that he would abolish them if he could find a way to legally do so.

Mr de Blasio told radio station WNYC. "He's dangerous not just because of his overt racism and homophobia, but because he is unfortunately the person with the most ability to be able to impact what happens in the Amazon going forward."

Scientists with ties to the museum threatened to resign if the event went ahead and many made their anger public on social media.