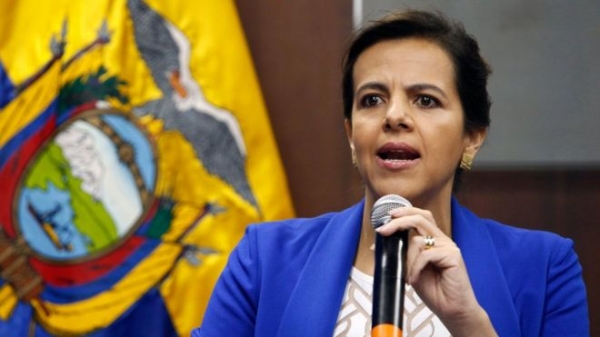 A man with close ties to Wikileaks co-founder Julian Assange has been arrested while trying to leave Ecuador, the country's interior ministry says. Interior Minister

María Paula Romo did not name the man but said he had been arrested for "investigative purposes".

An unnamed government official told the Associated Press that the man is Ola Bini, a Swedish software developer.

It comes just hours after Assange was himself arrested at the Ecuadorean embassy in London.

"A person close to Wikileaks, who has been residing in Ecuador, was arrested this afternoon when he was preparing to travel to Japan," Ecuador's interior ministry tweeted late on Thursday.

The man has lived in Ecuador for several years and has frequently travelled to the country's London embassy where Assange had been staying, Ms Romo told CNN's Spanish language service.

"He has been detained simply for investigation purposes," she said.

An Ecuadorean official, who spoke on condition of anonymity, told the Associated Press that Mr Bini had been arrested at Quito Airport.

As news of the arrest broke, friends and colleagues of Mr Bini expressed their concern on social media.

"I'm very concerned to hear that [he] has been arrested," Martin Fowler, a US-based computer programmer, tweeted. "He is a strong advocate and developer supporting privacy and has not been able to speak to any lawyers."

Earlier on Thursday, Ms Romo held a press conference and said a person with close links to Wikileaks was living in Ecuador.

In response, Mr Bini said on Twitter that her comments showed a "witch hunt" was under way.

What happened on Thursday?

Ecuador withdrew Assange's asylum on Thursday and the Metropolitan Police say they were then invited into the embassy to arrest him.

He took refuge in the embassy in 2012 to avoid extradition to Sweden over a sexual assault case that has since been dropped.

Ecuadorean President Lenin Moreno said the country had "reached its limit on the behaviour of Mr Assange".

There has been a long-running dispute between the Ecuadorian authorities and Assange about what he was and was not allowed to do in the embassy.

'Reckless hacktivist' or campaigner for truth?
How likely is a conviction in US?
Ecuador court throws out Assange lawsuit
After his arrest, Assange was taken to a central London court and found guilty of failing to surrender to the court in 2012.

As well as that charge, he now faces US federal conspiracy charges related to one of the largest ever leaks of government secrets.

The UK will decide whether to extradite him to the US. His lawyer said they would fight the extradition request because it set a "dangerous precedent for journalists, whistleblowers, and other journalistic sources that the US may wish to pursue in the future."

Timeline: Julian Assange saga
August 2010 - The Swedish Prosecutor's Office first issues an arrest warrant for Assange. It says there are two separate allegations - one of rape and one of molestation. Assange says the claims are "without basis"
December 2010 - Assange is arrested in London and bailed at the second attempt
May 2012 - The UK's Supreme Court rules he should be extradited to Sweden to face questioning over the allegations
June 2012 - Assange enters the Ecuadorean embassy in London
August 2012 - Ecuador grants asylum to Assange, saying there are fears his human rights might be violated if he is extradited
August 2015 - Swedish prosecutors drop their investigation into two allegations - one of sexual molestation and one of unlawful coercion because they have run out of time to question him. But he still faces the more serious accusation of rape.
October 2015 - Metropolitan Police announces that officers will no longer be stationed outside the Ecuadorean embassy
February 2016 - A UN panel rules that Assange has been "arbitrarily detained" by UK and Swedish authorities since 2010
May 2017 - Sweden's director of public prosecutions announces that the rape investigation into Assange is being dropped
July 2018 - The UK and Ecuador confirm they are holding ongoing talks over the fate of Assange
October 2018 - Assange is given a set of house rules at the Ecuadorean embassy in London. He then launches legal action against the government of Ecuador
December 2018 - Assange's lawyer rejects an agreement announced by Ecuador's president to see him leave the Ecuadorean embassy
February 2019 - Australia grants Assange a new passport amid fears Ecuador may bring his asylum to an end
April 2019 - The Metropolitan Police arrests him for "failing to surrender to the court" over a warrant issued in 2012. He is found guilty and faces up to 12 months in prison, as well as extradition over US charges of conspiracy to commit computer intrusion.