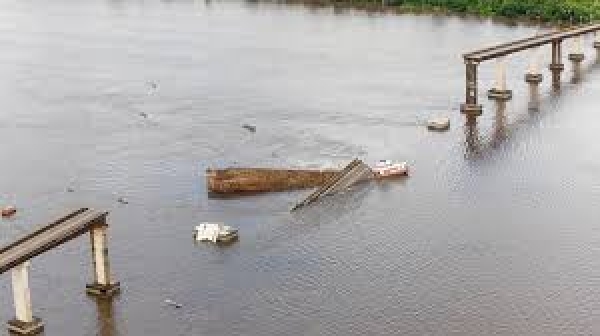 A ferryboat has collided with a bridge in Brazil's northern state of Pará, plunging a 200m (657ft) section into the Moju River. Witnesses said two small cars fell into

the water after the ship crashed into one of the pillars.

It is unclear, however, how many people have been hurt and scuba divers are searching the river. Five crew members on the ship are said to have survived.

Pará governor Helder Barbalho signed a state of emergency after the accident.

"Our priority is searching for victims and giving complete support to their families," he told state media.

The bridge in the country's Amazon region leads to one of Brazil's busiest ports, Belém.

Authorities are working to clear debris from the river and have set up a number of barges to ferry residents across the water until it can be fixed, while placing warning signs on pillars of other bridges nearby.

Local media reported that an inspection of the bridge earlier this year revealed corrosion on the pillars. While the government requested emergency funds to fix the problem, it reportedly did not consider the issue serious enough to close the route.

Police are investigating whether the ship was officially registered, the Associated Press says.

In 2014, a vessel collided with the pillar of another bridge nearby, causing about 50m of it to collapse into the water.

More in this category: « Venezuela crisis: Guaidó defiant after lifting of immunity Migrant caravan: Hundreds of Hondurans leave on new trek »
Login to post comments
back to top