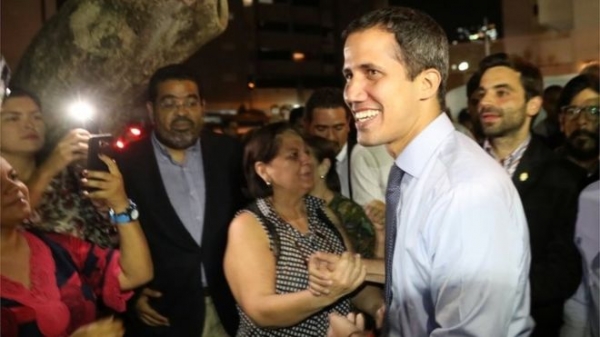 Venezuelan opposition leader Juan Guaidó has renewed his calls for anti-government protests, shortly after he was stripped of parliamentary immunity. "They think

that by attacking us they can put an end to hope, but... they won't stop us, we will give all for Venezuela" he tweeted.

With his immunity from prosecution lifted, Mr Guaidó could face arrest.

He has been at loggerheads with the government ever since he declared himself acting president on 23 January.

How did it come to this?
Mr Guaidó, who leads the opposition-controlled legislature, the National Assembly, argues that President Nicolás Maduro is a "usurper" because he was re-elected in polls that have been widely disputed.

Citing articles in the constitution which state that if the presidency is "vacant", the head of the National Assembly should take over power temporarily, Mr Guaidó declared himself acting president.

He has since been recognised by more than 50 countries. But President Maduro retains the support of key allies such as China and Russia among others.

What's the latest?
Mr Guaidó has reiterated his calls for Venezuelans to take part in fresh anti-government protests planned for Saturday. He has dubbed the protests "Operación Libertad" (Operation Freedom).

"We're going to continue protesting when there's no electricity or no water and to bring about the definite end to the usurpation #OperationFreedom. There is no turning back!" he tweeted [in Spanish].

Why was his immunity lifted?
Under the Venezuelan constitution, lawmakers cannot be arrested or put on trial unless they are stripped of their parliamentary immunity first.

Why is this move controversial?
According to article 200 of the Venezuelan constitution, the Supreme Court has the power to order the arrest or prosecution of a lawmaker "subject to authorisation in advance from the National Assembly".

In the case of Mr Guaidó, the Supreme Court, which is staffed by government loyalists, did not seek the authorisation of the National Assembly, in which opposition lawmakers are in the majority.

Instead, the Supreme Court turned to the National Constituent Assembly, a legislative superbody convened by President Maduro in a move widely seen as designed to bypass the National Assembly.

The body is made up exclusively of government supporters and it therefore came as little surprise when - in a unanimous decision - it gave the Supreme Court the green light to prosecute.

What was the mood like?
National Constituent Assembly head Diosdado Cabello read out the decree, which could lead to Mr Guaidó's arrest, to loud cheers and clapping before he led them in chants of "loyal - always, traitors - never" and "long live Maduro!".

Earlier, Constituent Assembly member María León told the assembly that she thought stripping Mr Guaidó of his immunity did not go far enough.

"For me stripping him of his immunity is very little. What do you do with traitors?" she asked. The assembly members responded with shouts of "al paredón" ("put him up against a wall").

How did Mr Guaidó react?
"When they ask for "paredón"... when they authorise a senseless trial by an illegitimate prosecution, the regime shows how it continues to make mistakes," he wrote on Twitter [in Spanish].

He also warned that he would act decisively "if the regime dares to kidnap me".

Mr Guaidó has been detained before, on 13 January, when what the government later described as "rogue members" of the intelligence service seized the 35-year-old before releasing him again after half an hour.

His chief of staff, Roberto Marrero, was arrested on 21 March and is facing charges of terrorism and planning "acts of sabotage".

What's likely to happen next?
Diosdado Cabello said that "justice now has to take its course". With his immunity lifted, Mr Guaidó could be arrested at any time, but Mr Cabello made it sound like his arrest was not imminent.

A number of high-profile supporters of Mr Guaidó, such as US Senator Marco Rubio, have warned the Maduro government that arresting the opposition leader would have serious consequences.