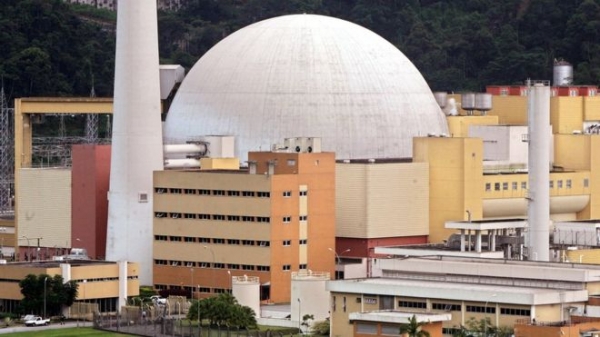 Gunmen have attacked a convoy of trucks carrying uranium fuel to a nuclear power plant near the Brazilian city of Rio de Janeiro, police say. The convoy came

under attack as it drove past a community controlled by drug traffickers in Angra dos Reis, a tourist city 145km (90 miles) from Rio.

Police escorting the convoy responded and a shootout followed. No-one was injured or detained.

The convoy reached the Angra 2 plant safely 20 minutes after the attack.

The attack in the Rio-Santos highway is the latest in a series of violent incidents in an area popular with visitors.

In 2017, a British woman was shot and wounded after her family's car drove by mistake into a community run by gangs.

Why are there so many murders in Brazil?
Stray bullets in Rio: The girl shot in the play area
The convoy was carrying uranium fuel fabricated in Resende, in Rio de Janeiro state, to supply Angra 2, one of the two nuclear power plants in Angra dos Reis, which began operations in 2001.

The gunmen targeted the police officers that were part of the convoy as it passed the Frade community at around 12:00 local time on Tuesday (15:00 GMT), Brazil's federal highway police said in a statement.

"Sadly, attacks by criminals have become frequent in that area... Such a beautiful region, with great tourist demand has become a dangerous place," spokesman José Hélio Macedo was quoted by O Globo newspaper as saying.

The uranium was being transported in armoured containers in a "natural state" and would not have offered any risk as it had the same level of radioactivity as when it is found in nature, Brazil's nuclear agency Eletronuclear said.

The agency, however, said the convoy "had not been attacked by bandits" directly - it was passing in the area at the moment a shootout was happening.

Some bandits scared by the heavy police presence shot at a police vehicle in the convoy, it added in a statement.

Reports say the shootout in Frade was a result of fighting between rival gangs.

Angra dos Reis Mayor Fernando Jordão urged the state's government to improve security in the region. "We have nuclear plants here. It's a sensitive area."

More in this category: « A tale of two Trumps: Jair Bolsonaro goes to Washington Brazil: Bolsonaro's coup celebration barred by judge »
Login to post comments
back to top