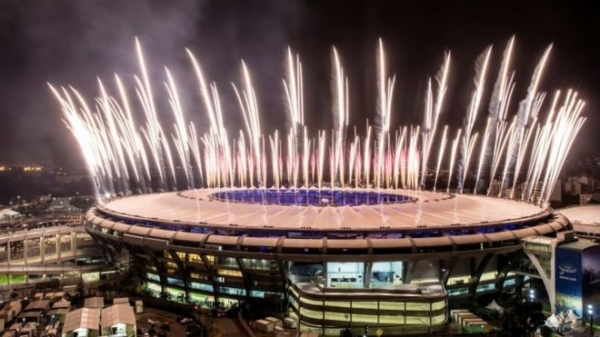 Rio de Janeiro state says it is taking over the running of Brazil's Maracanã stadium, cancelling the contract of a private consortium. Governor Wilson Witzel said the

decision would take effect on 17 April but would not disrupt football matches.

Rio's state assembly earlier said it would investigate the contract of the Consorcio Maracanã, saying there were signs of mismanagement and corruption.

The consortium said it was "surprised" by the state authorities' decision.

Last year, former Rio Governor Sergio Cabral was sentenced to 12 years in prison, accused of manipulating bids and overinflating contracts for the Maracanã.

Inside the refurbished Maracana
Rio's historic stadium
What have the games done for Rio?
The management of the Maracanã went into private hands in 2013 after a long and expensive refurbishment ahead of the 2014 Fifa World Cup and the 2016 Olympic Games.

The stadium has sat empty for months at a time after the Olympics. In 2017, looters broke into the stadium, smashing windows and stealing some items.

The Maracanã - which also hosted the 1950 World Cup final - has been used by all of Rio's big four teams, Botafogo, Flamengo, Fluminense and Vasco da Gama.

More in this category: « Brazil school shooting: Thousands attend wake for victims A tale of two Trumps: Jair Bolsonaro goes to Washington »
Login to post comments
back to top