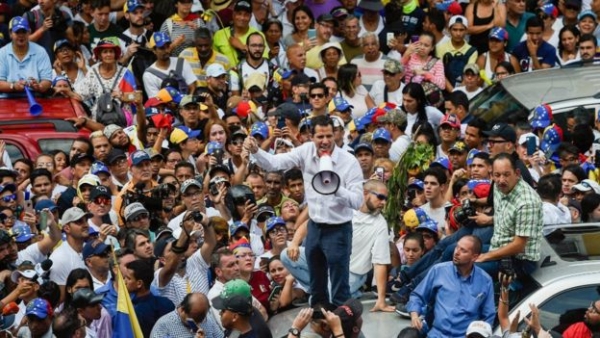 Rival demonstrations are taking place in Venezuela in response to calls by opposition leader Juan Guaidó and President Nicolás Maduro.

In the capital Caracas, some supporters of Mr Guaidó scuffled with police and were driven back with pepper spray.

Mr Guaidó declared himself interim president on 23 January and has been at loggerheads with Mr Maduro ever since.

Saturday's protests follow widespread power cuts that have affected much of Venezuela since Thursday.

Mr Guaidó, who leads the opposition-controlled National Assembly, has been recognised as interim president by more than 50 countries. However, Mr Maduro retains the support of the military and close allies including Russia and China.

What is the latest?
On Saturday, police were out in force where the opposition march was taking place in Caracas.

Some protesters pushed against police in riot gear shouting "murderers" and the officers responded by firing pepper spray at them.

Addressing the rally later, Mr Guaidó announced he would embark on a tour of the country and summon all his supporters to attend a mass protest in Caracas "very soon".

"We are going to come, all of Venezuela to Caracas, because we need all of them united," he said.

Using a megaphone to be heard above the chanting crowd, he called on his followers to remain "united and mobilised... in the streets".

In a defiant tweet early on Saturday, President Maduro vowed to battle the "brutal aggression against our people", adding: "We will never surrender."

What's the background?
President Maduro has accused Mr Guaidó of trying to mount a coup against him with the help of "US imperialists".

Mr Maduro took over the presidency when his late mentor Hugo Chavez died in 2013. In recent years Venezuela has experienced economic collapse, with severe food shortages and inflation reaching at least 800,000% last year.

The Maduro government is becoming increasingly isolated as more and more countries blame it for the economic crisis, which has prompted more than three million people to leave Venezuela.

What happened with the power cuts?
The widespread power cuts have reportedly been caused by problems at the Guri hydroelectric plant in Bolivar state - one of the largest such facilities in Latin America.

A fresh blackout struck on Saturday, El Nacional newspaper reported, cutting power to many areas where it had previously been restored.

In Caracas, traffic lights in some areas were back in action but the city's metro remained closed, reports said.

Venezuela depends on its vast hydroelectric infrastructure, rather than its oil reserves, for its domestic electricity supply. But decades of underinvestment have damaged the major dams, and sporadic blackouts are commonplace.

Mr Maduro accused the opposition of sabotage while his deputy, Delcy Rodriguez, condemned what she called an "imperial electrical war".

Mr Guaidó hit back, urging Venezuelans to demonstrate on Saturday "against the usurping, corrupt and incompetent regime that has put our country in the dark".

He said the blackout was the result of years of under-investment and told a gathering marking International Women's Day that it could not be normal that "50% of hospitals in the country don't have an electric plant".

On Friday, some hospitals saw chaotic scenes as relatives tried to move patients in the dark to other medical facilities with emergency power generators.

In pictures: Lights go out on Venezuela
Venezuela crisis in nine charts
Is there a cult of personality in Venezuela?
Venezuela's exodus
In Caracas's University Hospital, 25-year-old patient Marielsi Aray died after her respirator stopped working.

"The doctors tried to help her by pumping manually, they did everything they could, but with no electricity, what were they to do?" said her uncle Jose Lugo.

More in this category: « Juan Guaidó flies back to Venezuela despite arrest risk Brazil school shooting: Deadly attack in São Paulo »
Login to post comments
back to top