Juan Guaidó flies back to Venezuela despite arrest risk 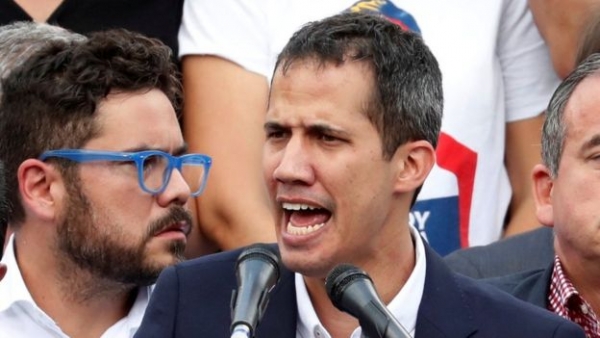 Venezuela's self-declared interim leader Juan Guaidó has arrived back in the capital, Caracas, to a rapturous welcome from thousands of supporters. He faces arrest

after defying a Supreme Court-imposed travel ban to leave the country and lobby for international help.

"They threatened us and here we are, putting forward our face for Venezuela," he told a huge rally.

Mr Guaidó has called on President Nicolás Maduro to resign.

The two men have been at loggerheads for more than a month.

Mr Guaidó - who heads the opposition-led National Assembly and proclaimed himself Venezuela's acting president after the legislature declared Mr Maduro's May 2018 re-election illegitimate - has been recognised by more than 50 countries. Mr Maduro, who is backed by China, Russia and Cuba, insists he is the only legitimate president.

Venezuela crisis - in nine charts
The country that has lost three million people
Supporters stand by Maduro
Venezuela's political crisis has been sparked by an economic meltdown in which hyperinflation has hit salaries and savings, leading many to flee the country.

What did Guaidó say on his return?
Mr Guaidó was received at the Simón Bolivar International airport by diplomats from the US and EU nations and a crowd of supporters who chanted "Guaidó, Guaidó" and "Yes we can".

US Secretary of State Mike Pompeo later reinforced this view later, congratulating Mr Guaidó on his "successful diplomatic efforts in the region and safe return to Venezuela" in a statement.

"The United States and freedom-loving nations around the world stand with interim president Guaidó, the National Assembly and all democratic forces as they work to establish free and fair elections that will return democracy to Venezuela," he added.

"The international community must unite and push for the end of Maduro's brutal regime and the peaceful restoration of democracy in Venezuela."

EU foreign policy chief Federica Mogherini has said that any measure that put at risk Mr Guaidó's "freedom, safety or personal integrity would represent a major escalation of tensions".

Diplomats from the Lima Group, a bloc of 14 Western countries created to tackle the Venezuelan crisis, has said that "serious and credible threats" had been made against the life of Mr Guaidó.

It said "any violent actions against Guaidó, his wife, or family" would be met by all "legal and political mechanisms".

How secure is Maduro?
While international pressure on President Maduro has steadily increased, the Venezuelan leader has dismissed all calls for him to step down and denounced them as attempted coups d'état.

According to Colombian migration officials, more than 500 soldiers have deserted from the Venezuelan army over the past weeks.

While this is a sign that lower-ranking soldiers are suffering the same hardships - shortages of food and medicine - as the general population and are willing to follow the more than three million people who have left Venezuela over the past years, there is no sign yet of a general switch in loyalty.

Government loyalists also still control much of the judiciary and the National Constituent Assembly, a body Mr Maduro set up to bypass the opposition-controlled legislative.

However, there are unconfirmed reports that Diosdado Cabello, the National Constituent Assembly head, has sent his two children to Hong Kong, which the opposition thinks is a sign of growing nervousness.

The government also appears to be feeling the sanctions imposed by the US. Reuters reported last week it had taken eight tonnes of gold from the Central Bank to sell abroad to raise badly needed cash.